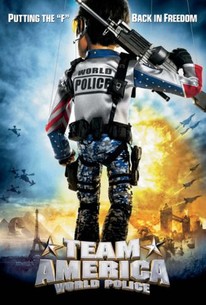 Critics Consensus: Team America will either offend you or leave you in stitches. It'll probably do both.

Critics Consensus: Team America will either offend you or leave you in stitches. It'll probably do both.

Critic Consensus: Team America will either offend you or leave you in stitches. It'll probably do both.

Team America, an international police force dedicated to maintaining global stability, learns that a power hungry dictator is brokering weapons of mass destruction to terrorists. The heroes embark upon a harrowing mission to save the world. To infiltrate the terrorist network, Team America recruits Gary Johnston, a rising star on Broadway to go undercover. Although initially reluctant to sacrifice his promising career, Gary realizes that his acting gift is needed for a higher cause. With the help of Team America leader Spotswoode and fellow members Chris, Sarah, Lisa and Joe, Gary slips into an arms dealer's hideout where he discovers that the terrorists' plot has already begun to unfold. From the pyramids of Cairo to the Panama Canal and finally to the palace of power-mad dictator Kim Jong-Il, Team America criss-crosses the globe on a desperate mission to preserve the very fabric of civilization.

Juvenile in the worst sense: confused and frightened by the adult world, and begging to be protected.

The first work from Parker and Stone that I'd describe as a failure of nerve.

I thought it was pretty clever.

Team America is at once grandiose and tacky, elaborate and deflationary.

Team America is not as funny as the South Park movie, and some of its juvenile humor falls flat. But when Team America works, it falls squarely into the category of guilty pleasure.

When it comes to politics, the South Park boys mistake contempt for humor.

The whole thing plays like Thunderbirds Goes to Hell and will doubtless offend all those numskulls who complained about the BBC's transmission of Jerry Springer: The Opera. For that alone, it gets my vote.

Putting the fun back into misanthrope

There is almost nothing here of what makes South Park so hilarious, as this is pretty much like watching two very dumb seven-year-old (American) kids playing with their toys for nearly two hours (and trying to be offensive towards everyone) but barely managing to be funny.

The films title says it all really, a sharp satirical play on the fact that the rest of the globe kinda thinks the US wants to police the world. Business as usual for the South Park creators as they present this biting mockery of a comedy that does one of two things...homage the use of marionettes whilst also taking the piss, and literately taking the piss out of American foreign policy. The whole film is a complete send up of your bog standard action flick porn, all the obligatory cliches and stereotypes packed into a smart satire of American politics that naturally revolves around the Middle East. Its all very straight forward, a team of super anti-terrorist soldiers (ala Tom Cruise in 'Mission: Impossible') do battle with terrorist threats on a daily basis. During one mission they get captured and must be rescued by the newbie of the team who is unsure of himself, that's virtually it. The first thing that is so funny about this film is the fact its all been created with puppets, yes puppets, just like Thunderbirds. Puppet action heroes doing everything your regular cookie cutter Hollywood action flick does. The film has the visual style of a cool kids show combined with a kids toy line. All the main vehicles of Team America are slick hi-tech super awesome looking power models emblazoned with a red white and blue paint job to nail the Stars n Stripes motif home. The team are decked out in natty SWAT-like uniforms with shades headsets and of course lots of big guns, whilst their base is a typical Bond-esque setup within Mount Rushmore with lots of flashy tech stuff, a big intelligent talking computer and their very own Nick Fury/Professor X type leader. All the bad guys look exactly as you would expect from a satirizing angle of Middle Eastern terrorists, lots of facial hair and rags. Oh and you can see the strings attached to the puppets too further enhancing the laughs. Despite the film looking like a toy merchandise wet dream it is of course a full on adult adventure. This is the amazingly amusing thing about it all, its children's puppets swearing, having rampant sex and being killed in gruesome ways. Just as South Park is funny because its a naughty cartoon this works on the same level. The violence and visual obscenities are created at a puppet level so its never really shocking because its all being done with puppets and its simply more acceptable. A puppet being blown apart or eaten alive by sharks doesn't really shock because we all know its a children's toy, had it been live action it would be pretty horrific. The other main funny bone tickler is the quite brutal mockery of famous stars, Middle Eastern folk, world leaders and of course the action genre. In between all the hyper action flick mockery various real actors get ripped on pretty well along with the Screen Actors Guild which has been hilariously renamed the Film Actors Guild. I loved the ultra liberal portrayal of this celebrity group, the way they are all made out to be enemies of Team America because they want peace and unity with the Middle East. They blame Team America for unnecessary killings, destruction, racism etc...and are blind to Kim Jong-il's plans...oh and the fact almost all of them get killed horribly. Talking of Kim Jong, what a way to go down in movie history! via Trey Parker's gut busting rendition (piss taking) in that completely racist voice he does so well, fantastic!. It is completely brilliant how Team America go into missions destroying anything and everything in their path to take down one or two terrorists. The way they blow up half of Cairo and its ancient treasures, Paris with its landmarks and are completely oblivious to the ruin because in the end they got their intended targets, so its all good. Collateral damage at its finest Hoorah!!!. Even though the film can't escape its South Park routes, because its all Trey and Stone, that doesn't hinder it. Yeah all the voices are familiar, the satire isn't exactly new, 'Derkaderkastan' or the term 'Derka' has popped up in various South Park episodes I believe as speech for Africans and Middle Eastern folk, all foreign people simply speak the same kind of gibberish much like they do in certain South Park episodes, there are the odd risque musical numbers etc...At the same time there are some really edgy moments that seem truly un-PC but its so funny. When Gary infiltrates the terrorist headquarters at the start the puppet has a simple bath towel on his head! then inside the terrorist bar its all made out like the Mos Eisley cantina from 'A New Hope', simple but totally effective. This film is so darn accurate in its analysis of US foreign policies and left wing activism I'm amazed it managed to surface. It virtually mocks everything about America and it all holds up to this day, I imagine it must make some Americans cringe. Next to that the action genre is an easy target but its still skewed perfectly here, right down to the last cheesy cliche. Funny thing is the film also looks terrific and really is a genuine homage to the use of marionettes. Everything looks so rich in detail its actually a shame the content will inevitably upset many in Hollywood, meaning the craftsman involved probably won't get the recognition they deserve, that's irony for you.

A clever, vulgar, unique comedy from the minds of the South Park creators concerning a team of police whose mission is to protect the world from any threats, including dictators like Kim Jong-Il, who wish to destroy the world with nuclear weapons. Although "admirable" might not be the best word to describe the film, it's really impressive that these guys were able to pull off a film using nothing but marionette puppets, which speaks to their passion as I'm sure this was no easy task filming scenes. They have no problem poking fun at their own creation, with some hilarious fight scenes and spurts of violence that are side-splittingly finny. If you like "South Park", you should like this film easily. If you can't stand these guys sense of humor, then stay away from this as well. I think "South Park" is one of the best shows of all-time, so I naturally ended up enjoying this movie.

Joe: Shit! I've got five terrorists going southeast on Bakalakadaka Street!  "Freedom Hangs By A Thread." Basically, Team America is exactly what you would expect from the team behind South Park. It's raunchy, it's politically incorrect, and it's funny. Still there seemed to be something missing from the formula that made this just another comedy, instead of something truly memorable and amazing like South Park. By no means is this a bad movie, and I could see how one could easily fall in love with it. I just couldn't. Team America is a police agency that polices the world stopping terrorists in distant lands. A new comer to the agency is Gary, an actor. The group soon finds themselves outmatched when Kim Jong Il teams up with Alec Baldwin and the rest of the F.A.G. organization.  The movie has some extremely funny moments. It also features probably the funniest sex scene in the history of filmmaking. The movie is made with marionettes, so there's a lot of jokes aimed from that direction. I wouldn't call it a one joke comedy, but one of its jokes(the marionettes) doesn't work for as long as we would hope. Still, there's enough of the other stuff going on to keep the movie watchable and entertaining. I have to admit that I'm slightly disappointed in the end result of Team America, but still it's a worthwhile and funny little marionette fueled film. Lovers of South Park need to give it a chance because the comedy will be right to their taste. Parker and Stone are smart enough to make this a satire that actually works on that basis. Sure, it's stupid, but that's what makes it funny. It could have been better, but as it is, it's not bad.