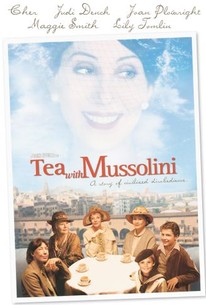 Critics Consensus: Tea with Mussolini contains few surprises, but this amiably ambling drama is too likable -- and well-cast -- to completely resist.

Critics Consensus: Tea with Mussolini contains few surprises, but this amiably ambling drama is too likable -- and well-cast -- to completely resist.

Critic Consensus: Tea with Mussolini contains few surprises, but this amiably ambling drama is too likable -- and well-cast -- to completely resist.

Taken from a chapter in the autobiography of acclaimed filmmaker Franco Zeffirelli, TEA WITH MUSSOLINI is written by British novelist and playwright John Mortimer and Zeffirelli, drawing on the latter's published memoirs. The film tells of Luca Innocenti (born out of wedlock and not officially recognized by his father) and his struggle to assert his independence and find his way into a life of art. The coming-of-age tale is also a haunting evocation of a vanished world: that of the quiet city of Florence on the brink of World War II. Judi Dench, Joan Plowright and Maggie Smith portray the eccentric, colorful and strong-willed ladies - called the "Scorpioni" for their biting wit - who, along with a free-spirited American art collector (Cher) and archeologist (Lily Tomlin), raise the youth and fashion him, though Italian, into "a perfect British gentleman."

Baird Wallace
as Luca (as a teenager)

Charlie Lucas
as Luca (as a child)

Critic Reviews for Tea with Mussolini

The movie is heavier with events than with plot. Things are always happening, but it's hard to see the connections, and the material involving Elsa's love affair, Lady Hester's draft-dodging grandson and Arabella's dog all coexists uneasily.

It's a lazy, thoroughly old- fashioned entertainment... Yet it's also unexpectedly watchable and unpretentious -- campy, too, if you're into that kind of thing -- and it communicates a sense that everyone involved had a super time making it.

A collection of isolated, anecdotal events that are as warmly amusing as they are lacking in narrative drive.

The banter, jealousy and cattiness among these charming stereotypes of the Anglo-American lifestyle sweepstakes makes much of this engaging film a winner.

Art and suffocating tastefulness are taken as such inherent goods in [this film] that they utterly overwhelm the real people whom the film pretends to showcase.

This satisfying film reveals the ways in which a village can successfully raise a child.

Cher shines with the spirit of 'Life is Beautiful.'

Audience Reviews for Tea with Mussolini

Three Grande Dames of the British stage and film (Maggie Smith, Judi Dench, and Joan Plowright) come together, along with Americans Cher and Lily Tomlin to power this tale of a group of British ex-pats and their brash American friends trying to preserve their way of life in Italy just before the Second World War. The acting is superb, and the story, based on actual events as remembered by the director, Franco Zeffirelli, is spellbinding. Maggie Smith can do imperious. And she does it brilliantly here. Yet she does have a tender side when the chips are down. Joan Plowright proves to be the heart and soul of the film however and more than holds her own beside the other two. The story bears a slight similarity to that of Paradise Road, but without the despair and brutality of that other story, from the Japanese theater of the war. This viewer really enjoyed this.

What the Hell is Cher doing in this good movie?

True story about a group of women bonded together by their situation during World War II. Excellent cast. Beautiful scenery.