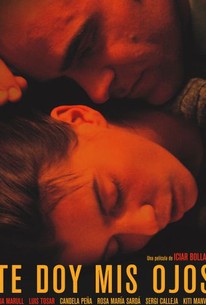 Spanish actress/author/filmmaker Icíar Bollaín writes and directs the family drama Te Doy Mis Ojos (Take My Eyes), co-written by Alicia Luna. Pilar (Laia Marull) leaves her abusive husband, Antonio (Luis Tosar), during the middle of winter in Toledo, Spain. She and her son, Juan (Nicolás Fernández Luna), go to live with her sister Ana (Candela Peña). While supportive, Ana doesn't fully understand Pilar's situation. Pilar's mother, Aurora (Rosa María Sardà), refuses to acknowledge the problem. Antonio is desperate to win back Pilar. He sends her constant presents and even attends therapy sessions in order to work through his anger. Meanwhile, Pilar gets a job at an art museum and tries to restart her life. Take My Eyes won several awards at the San Sebastian Film Festival before making its U.S. premiere at the Sundance Film Festival in 2004. ~ Andrea LeVasseur, Rovi

Antonio Castillo
as Man in therapy

Luis Lopez
as Man in therapy

A mesmerizing and deeply disturbing film from Spain.

Approaching potentially unpleasant subject matter with humor, intelligence and deep compassion for its flawed yet infinitely human characters, Take My Eyes is almost certain to rank as one of the year's best films.

An extraordinarily truthful and piercing drama about spousal abuse.

What makes the movie fascinating is that it doesn't settle for a soap opera resolution to this story, with Pilar as the victim, Antonio as the villain, and evil vanquished. It digs deeper and more painfully.

Though deceptively straightforward in its exploration of the causes and effects of domestic abuse, Take My Eyes benefits from the grubby verisimilitude Bollaín brings to his material, which otherwise might have lapsed into movie-of-the-week superficiality

This tale of domestic abuse breaks little new stylistic or psychological ground, but it is a searing, well-acted drama that should strike universal chords.

Domestic abuse has been portrayed on film before but never with this much complexity.

Every element of the production is well-crafted. Take My Eyes is highly recommended.

Actors Laia Marull and Luis Tosar explore the intricate details of a relationship based on the laws of attraction and repulsion, in which the intellect is repeatedly devastated by primal passion.

The performances from Marull and Tosar ... are superbly nuanced, carefully tweaking your emotions until they ensure that Take My Eyes is one of the most moving films you'll see this year.

We emerge worn but wiser, having stepped, if only momentarily, and secondarily, into the shoes of the brutalized.

A fantastic drama that shows the difficulties and pure cruelty of domestic violence, without ever becoming outlandish. Marull plays a woman that flees, with her son, from her marriage. The film is very clever in showing this act first. It leaves us as fascinated voyeurs and doesn't force us into feeling to much animosity towards the husband. This is key in allowing the film to explore its themes. Later we hear about visits to the hospital, but we don't see this happen. In fact, we see the husband trying to seek help before we see him do anything cruel. I loved this clever touch, as our view of him wasn't tainted. This is probably how many family members saw him. Hearing about his exploits, but is there a chance the wife is exaggerating? As the film progresses, we see the husband as a tragic character. Tosar adds an infinite amount of layers, but we finally see his anger as an uncontrollable destructive force. He sees himself as the victim and his wife as the enemy. In his mind, he is being assaulted. As the film draws towards its climax, there is a sense that they could work it all out, and from that comes hope. The films greatest achievement is not being about the victims. It isn't sappy, preachy, or unbearable. It would have been easy to show Tosar beating Marull, but the film's climax is even more disturbing, due to all the misplaced anger. A great movie.

Sure there were films dealing with domestic violence, but this one was so intense. This is something that had been happening quite often everywhere, in every country. And this movie was shot to make people aware for this issue and to talk about it. It is the story of a jealous husband, full of complex of inferiority, terrorizing his wife and son. I loved the love scene between both, where he made her say that she gave all her body to him. It showed perfectly the mental state of the husband who sees his wife as his property. It is so difficult to break the relationship, specially when there are kids involved. Also the challenges that women had to face when they try to leave. I think this movie is very realistic and the actors did a great job. I highly recommend it.

This film took the top prize at a local film festival here (the same one where I saw "Las Horas del Día") so I was very surprised, having finally seen it, to find it uneven and, considering the competition, unworthy of its award. It is by no means a bad film. It is, in fact, quite brave: a portrait of an abusive relationship that spends quite a deal of time focusing on the abuser, his insecurities, his fears. It manages to humanize him completely without once making excuses for his brutal behavior. This is no charicature, but a man who knows he has a problem and seeks help. The problem is that much of the film feels like a PSA announcement. I later found out, in fact, that the film had begun as PSA-ish short and was later expanded to feature length, which makes perfect sense. Its after-school-special feel is a shame, because a lot of it is incredibly powerful. The character of Antonio is richly developped, and devastatingly played by Luis Tosar, one of the very best actors working in Europe today. The character of Pilar is not nearly as developed, but also well played by Laira Marull. Their relationship is believable, as are their reconcilliations and the scenes of abuse. It is telling that by the end of the film we, paradoxically, want for Pilar to leave, get a better life and be happy and for Antonio to pull through, work out his demons, keep his anger in check and be happy as well. Of course, Antonio is only happy with Pilar, though the opposite is not entirely true. The direction is somewhat flat, and the writing uneven and preachy, but the performances more than make up for it. This is indeed a good film worth watching, but far from the great work it has been praised as being.