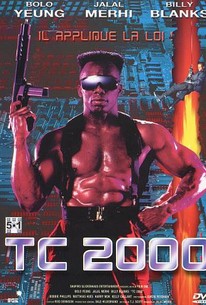 This sci-fi actioner tells a martial artsy version of a split society during the 21st century. The upperclasses dwell in extravagant shelters below the surface of the earth--which was destroyed by a damaged ozone layer. The surface, of course, is where the poor have been left to fend for themselves. To ensure the safety of those underground, the Controller employs a department of Tracker/Communicators (or T.C.s) to function as security guards/cops. Now that the earth has finally repaired itself, the "bosses" of the shelters plan to get rid of inhabitants on the surface with a doomsday weapon so they can return to the coveted domain. After his partner Zoey (TC200X) is killed and cyberly resurrected as an android, Jason Storm (TC2000) must use his karate expertise to battle the Controller's gangs, both from the surface and the shelters, while he attempts to save the world from nuclear disaster.

There are no critic reviews yet for TC 2000. Keep checking Rotten Tomatoes for updates!

Extremely bad acting of all actioner and martial artist cast in the futuristic film.