Taste the Blood of Dracula1970 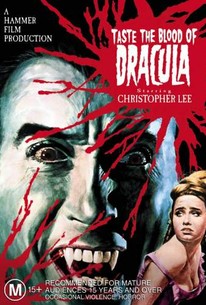 Taste the Blood of Dracula Photos

A Victorian English lord hosts a black-magic ceremony that resurrects Count Dracula in this, the fourth Hammer horror production to feature the notorious vampire. When the lord is killed, the vampire sets out to avenge his death, utilizing the killer's own children.

Peter May
as Son

Critic Reviews for Taste the Blood of Dracula

A strong cast and some interesting relationships make this a worthwhile entry, although the denouement is lamentably laughable.

Thematically intriguing %u2014 a sort of broadside attack on Victorian hypocrisy.

The strangest and most confused of the Dracula films up to that point, and the first of Hammer's vampire films where the bad elements seriously threaten to outnumber the good.

Given the lack of Lee screen time, 'Taste' is actually a pretty damn good Hammer film, with a strong story, the usual stock of excellent actors, great costumes, etc.

Is this Dracula 4 or 5 for Christopher Lee? No matter for his fans, it's never enough.

Drink the blood of the Master!

...a vampire film where the vampire hardly shows his face or fangs.

Taste the Blood of Dracula is unusual in that it keeps Dracula somewhat on the sidelines.

Audience Reviews for Taste the Blood of Dracula

It's a typical Hammer film, filled with great gothic set deign and art direction, cleavage (and a bit of actual boobs), and of course some blood and gore, all strung together by a lurid and ridiculous plot. Picking up where its predecessor Dracula Has Risen From the Grave left off, the ending of that film is slightly retconned so as to have Dracula's demise witnessed by a guy travelling through the countryside who decides to take the Count's cloak, dried blood, and ring. Later on, that guy, Weller, sells Dracula's things to three bored wealthy English gentlemen with an interest in the occult, and, after drinking some of Dracula's blood, the three guys beat Weller and leave him for dead. He transforms into Dracula, who, upset over his servant being killed, seeks revenge on the three men. This is a nutty plot, but it does have some neat ideas. Unfortunately, the technical apects and the ideas can't ave a film if the execution is boring and subpar. I liked individual moments, but overall found this to be a bore. Heck, Dracula is barely in it, and Lee says mayeb 10 words the whole time. Of course, since he's Lee, he's got a commanding presence, even though he rarely speaks. He's a high point, and it's a hame he's got limited screentime. You can't say that Hammer made uninteresting films, that's for sure. It's just a bummer that they weren't always very competantly made or as entertaining as they should have been, which is definitely the case here.

A Hammer Films Production thats is over the top, With Christopher Lee who said maybe 10 words during the whole movie, but still one of the best vampire movies of the seventies I have seen, And Linda Hayden put herself over the top as a beautiful women of the seventies. A 4 star film with a good story line.

Just like all the other Dracula movies from Hammer starring Lee. Lee is a great Dracula, but I always wish we could see more of him in the movies, including this one. The story is somewhat similar to Stoker's original story, but not as good. This movie is really predictable and kinda stupid, but it's okay.

A trio of seemingly respectable, well-to-do Victorian gentlemen (played by Geoffrey Keen, Jonathen Secker, and Peter 'more cheese, Gromit?' Sallis) form a secret club in order to experience the wildest thrills that life has to offer. However, their limited imaginations mean that they soon become bored, and so they decide to take their lead from disgraced aristocrat and practising Satanist Lord Courtley (a marvellously slimy Ralph Bates), who suggests that they attempt a ritual to bring the infamous Count Dracula back to life. When the three men panic during the ceremony, and beat Courtley to death, they flee the scene, not realising that Count Dracula (Christopher Lee) has indeed returned from the dead, and now seeks retribution for the killing of his loyal acolyte. Although Hammer's Dracula movies rarely strayed far from their well-worn formula-Dracula lives; Dracula kills; Dracula dies-their lush Gothic atmosphere, fine ensemble casts, and sumptuous cinematography usually meant that, even when the script was somewhat lacking, there was still plenty to enjoy. Such is the case with Taste The Blood Of Dracula, which features a so-so story and a surprisingly unremarkable turn from Lee (who is forced to deliver some particularly dodgy dialogue), but manages to keep fans entertained with some gloriously camp performances from the rest of the cast, some fine direction from Peter Sasdy, and loads of Hammer's trademark Gothic trappings. Plus, this entry in the series also stars the gorgeous Linda Hayden-one of my favourite actresses from the late 60s/70s-whose presence makes it a must-see as far as I am concerned. Her transformation from wide eyed innocent to slutty vamp slave (with cleavage on display, naturally) is reason enough to seek this one out!

Taste the Blood of Dracula Quotes