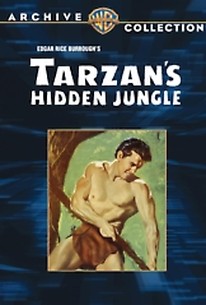 Posing as a film crew, a team of illegal hunters enters the teeming animal sanctuary of the Sukulu tribe. Their plan: drive the elephants, rhinos and lions out of the sacred land and slaughter them for their hides. When we first meet the Ape-Man in Tarzan's Hidden Jungle, he's swimming in the river a fitting introduction for Gordon Scott, the muscular new screen Tarzan who was discovered while working as a lifeguard at a Las Vegas resort. Zippy, a favorite on numerous '50s TV shows, portrays Cheetah. And the sense of jungle love you may detect between Scott and co-star Vera Miles is the real deal. They became an off-screen Mr. and Mrs.

A beaming ex-lifeguard named Gordon Scott makes a likeable but implausible debut as apeman No. 1 1 in a series that has prospered without interruption since 1918.

There are no featured reviews for Tarzan's Hidden Jungle at this time.