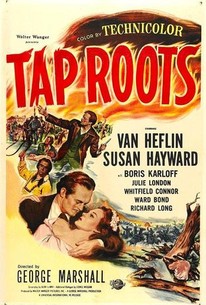 Set at the beginning of the Civil War, Tap Roots is all about a county in Mississippi which chooses to secede from the state rather than enter the conflict. The county is protected from the Confederacy by an abolitionist (Ward Bond) and a Native American gentleman (Boris Karloff). The abolitionist's daughter (Susan Hayward) is courted by a powerful newspaper publisher (Van Heflin) when her fiance (Whitfield Connor), a confederate officer, elopes with the girl's sister (Julie London). The daughter at first resists the publisher's attentions, but turns to him for aid when her ex-fiance plans to capture the seceding county on behalf of the South. A pocket-edition Gone With the Wind, Tap Roots is way too ambitious for its smallish budget. Modern viewers can have fun spotting such anachronisms as the Southern troops' use of dynamite--several years before it was invented. ~ Hal Erickson, Rovi

There are no critic reviews yet for Tap Roots. Keep checking Rotten Tomatoes for updates!

There are no featured reviews for Tap Roots at this time.