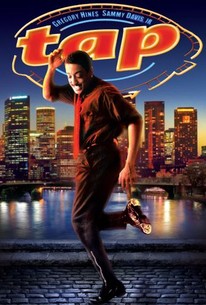 Gregory Hines plays the ex-convict son of a famed tap-dancer. Taking over his late father's Harlem dance studio, Hines can't shake memories of his childhood, when he was being touted as a dancing prodigy. Challenged to fulfill his destiny by his dad's old cronies--among them such terpsichorean giants as Sammy Davis Jr., Steve Condos, Jimmy Slyde and Harold Nicholas--Hines does his best to avoid lapsing back into a life of crime. The struggle to save Hines' soul is a titanic one, with Hines' girlfriend Suzzanne Douglas tugging at him from one direction and his old burglary partner Joe Morton yanking from the other. The plotline of Tap is merely an excuse to show off some of the most dazzling footwork ever recorded on film. The director is Nick Castle Jr., who like star Gregory Hines is scion of a legendary dancing family.

Steve Zimmerman
as Dancer
View All

Almost everything that happens in the movie is borrowed, more or less frankly, from old movie lore. In a way, that's also a strength: This is a musical about musicals, as well as being a tap dance movie about tap dancers.

Getting nervous feet is a good thing in Nick Castle's energizing Tap. It's a pleasure to see a legendary showstopper like Sammy Davis Jr. chew up the scenery with his awestruck protege Gregory Hines.

There are no featured audience reviews yet. Click the link below to see what others say about Tap!