Talk About a Stranger1952 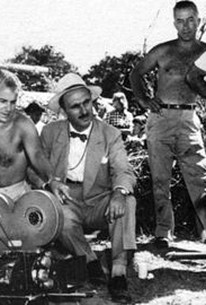 Talk About a Stranger Photos

Young Robert Fontaine, Jr. (Billy Gray) lives with his hard-working father (George Murphy) and mother (Nancy Davis), who is soon to give birth to a second child, on their northern California citrus farm. He's lonely on the farm and has been saving to buy a dog. One day, a mysterious stranger (Kurt Kasznar), who gives his name as Matlock, moves into the empty house adjacent to the farm -- he's not only highly strung but downright hostile to any friendly overtures that Robert Sr. or anyone else makes. Meanwhile, young Robert finds a stray dog that he adopts, and his whole life seems to blossom with his new companion -- but one day he finds the dog dead. He becomes fixated on the notion that Matlock poisoned the dog, and insists that his father do something -- but when Matlock angrily denies knowing about it, the boy's frustrations start to build. He tries to report to the poisoning to the police; when they won't help, he tries to get Mr. Wardlaw (Lewis Stone), the owner of the newspaper that he delivers, to run a news story about it, and when Wardlaw tries to reason with the boy, his rage finally boils over and he goes out-of-control. The boy decides to try and gather evidence against Matlock and follows a trail that takes him across the state hitchhiking, to the home of the former owner of the house Matlock is living in, and there he confronts a rumor that the other man was murdered. Stories and whispers begin to spread through the town about Matlock that make him seem even more sinister. The populace are getting stirred up, and Robert Jr., in his rage, commits an act of vandalism that threatens the entire community.

Critic Reviews for Talk About a Stranger

Audience Reviews for Talk About a Stranger

There are no featured audience reviews yet. Click the link below to see what others say about Talk About a Stranger!

Talk About a Stranger Quotes