Tales Of The Grim Sleeper2014 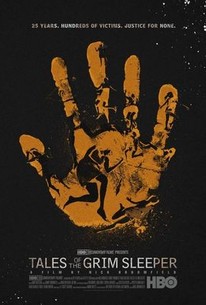 Tales Of The Grim Sleeper Photos

Master documentary provocateur Nick Broomfield (KURT & COURTNEY, HEIDI FLEISS: HOLLYWOOD MADAM, BIGGE AND TUPAC) shows himself in stunning form in TALES OF THE GRIM SLEEPER, the story of a serial killer who ran unchecked for 20 years in South Central Los Angeles. When Lonnie Franklin Jr. was arrested in 2010 as the suspected murderer of a string of young black women, police hailed it as the culmination of 20 years of investigations. Four years later, Broomfield visited the alleged killer's neighborhood to find out if the police had earned their self-given kudos. There, he finds a world of people who suspected for decades that there might be some connection between their odd neighbor and the dozens of women who had gone missing from the street - but who had good reason not to trust the LAPD to help their community. After the residents are initially as reluctant to talk to him, Broomfield enlists the help of Pam, a charismatic, funny and fearless former prostitute eager to help get to the bottom of these murders. With Pam leading the charge, Franklin's friends and neighbors open up to Broomfield on just how much of the spree was common knowledge to anybody who went looking, and how little interest the police seemed to take. In scenes building to an unbelievably powerful conclusion, Broomfield reveals the journey of a serial killer and gives voice to his victims, as he builds a powerful assemblage of testimony conveying a grave injustice that extends well beyond this case. (C) HBO

News & Interviews for Tales Of The Grim Sleeper

Critics Consensus: The Hobbit: The Battle of the Five Armies is a Solid Sendoff

View All Tales Of The Grim Sleeper News

Critic Reviews for Tales Of The Grim Sleeper

What emerges, finally, is an urgent distress call from one of America's many, predominately black inner cities cast adrift by decades of municipal neglect and institutional racism.

Tales of the Grim Sleeper develops in frightening and moving ways.

Set against our current flurry of stories on police/community tension, The Grim Sleeper suggests we could use a wakeup call.

Tales Of The Grim Sleeper subtly, persistently makes the case that to write anybody off because of where they're from isn't just an outrage, it's damned inhumane.

Tales from the Grim Sleeper concludes by offering up the haunting possibility that even if the killer has been caught, the systemic failures that let him get away with it for so long remain firmly in place.

The dark recesses of a diseased mind may make the headline, but it is the indictment of far more widespread infection that rings out and is striking in its prescience.

Tales of the Grim Sleeper is so outlandish, shocking, and culturally relevant that of course it's going to drop a few jaws, but the ever scarier afterthought is how these murders went unaccounted for, for so long. Now that is truly haunting.

Like the best of Broomfield's work, it's both an explanation and investigation, the filmmaker puzzling out a complicated story as he goes, dogged in his determination.

The sordid yet mundane (making it all the sadder) story of a black community plagued by police unconcern, with the men closest to the accused almost shruggingly inured to his voyeurism and predation. (The impressive fighters here are female.)

Nick Broomfield's excellent documentary reveals how violence toward poor black women works in collusion between the personal and the political silence of members in the community...

Broomfield meticulously frames his engagements with the South Central residents as dedicated to illuminating how personal strife consistently traces to economic subalimentation and historical degradation.

Audience Reviews for Tales Of The Grim Sleeper

There are no featured audience reviews yet. Click the link below to see what others say about Tales Of The Grim Sleeper!

Tales Of The Grim Sleeper Quotes