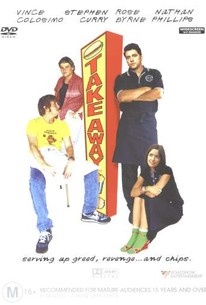 Marc Gracie's Australian comedy Take Away concerns a business rivalry between fast food entrepreneurs. Starting with a segment that shows the birth of fast food, the film quickly establishes the relationship between Tony (Vince Colosimo) and Trevor (Stephen Curry). The anal Tony runs a fish and chip stand more or less right next to the free-wheeling Trevor's more exotic stand that offers calamari burgers. The two have known each other forever, as their fathers owned a restaurant together. They had a falling out and the feud has been passed down to the sons. After they learn that a large fast food corporation, Burgies, is coming into the area, Tony and Trevor work together to stop them. John Howard portrays the head of the Burgies company. ~ Perry Seibert, Rovi

Matthew Dyktynski
as The Manager

Francis Greenslade
as Innkeeper
View All

Critic Reviews for Take Away

There are no critic reviews yet for Take Away. Keep checking Rotten Tomatoes for updates!

Audience Reviews for Take Away

There are no featured audience reviews yet. Click the link below to see what others say about Take Away!