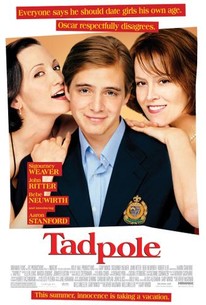 Most 15-year-old boys are obsessed with the opposite sex, but this may be the only area in which Oscar Grubman (Aaron Stanford) could be called typical. An honor student at an exclusive prep school, Oscar is confident, keenly intelligent, speaks fluent French, and is well versed in the work of a number of French authors, particularly his favorite, Voltaire. Oscar seems to have gotten his fascination with French culture from his mother, who several years ago divorced his father Stanley (John Ritter), a college professor, and moved to Paris. Stanley has recently remarried, taking an attractive woman in her mid-forties, Eve (Sigourney Weaver), as his new wife. Oscar, however, senses that Eve isn't happy in their marriage; certain he can give Eve the affection (both physical and emotional) that she needs, Oscar begins waging a low-key but ardent campaign to seduce his step-mother over the course of Thanksgiving weekend, despite the fact a number of Oscar's female classmates have made no secret of their attraction to him. Oscar's efforts to bed Eve attract the attention of one of her close friends, Diane (Bebe Neuwirth), a smart and sexy chiropractor who also becomes the not-entirely-unwelcome focus of Oscar's romantic attentions. Shot using digital video equipment, Tadpole was enthusiastically received at the 2002 Sundance Film Festival, where the film's director, Gary Winick, received the Director's Award.

Michael Conners
as Man in Bar

Theo Kogan
as Woman in Bar

In every respect, director Gary Winick has served up a delectable, entertaining film.

The top-notch cast brings the story to life with aplomb.

One of the smartest, most affecting movies of the year.

[D]emonstrate a certain affinity for the intimate observation of moral waywardness.

Coming-of-age comedy with some sex.

It's a flawed but satisfying movie with a great leading man, and a slew of great supporting performances.

In a summer wrought with action adventures and dramatic epics, it's a refreshing change to trust in the teachings and maturity of a 15-year-old.

The worst movie of 2002: 'Any film with such a formulaic foundation...faces the burden of succeeding in spite of it, yet Tadpole just dumbly offers it back up to us.'

Sigourney Weaver and Bebe Neuwirth are cougars before there was name for it.

Mostly grating story about an arrogant, but brilliant, 15-year-old who falls in love with his stepmother. This movie tries to be edgy, a la Rushmore, but, due to a lack of likable characters, winds up being irritatingly stuffy instead.

I could rank this higher if it weren't for one thing, the film looses real ground with Oscar getting too obssesed with Eve and even rejecting offers from other women. No matter how smart and sharp a 15 year old kid can be, the chance of getting laid with fine ladies at that age is like finding gold under your bed. No teen would say no to that just because he is in love with someone. Yet, the film is quite fun to watch, especially for anyone who felt like the main character at some point over those teen years. No connection at all with people of his age, and with way too different interests. That and the taste for mature dames. Nice wet dream of a movie, could have been better. Bebe Neuwirth looks damn good in this one. Only mentally derranged and under the influence of strange medications i would have prefered Weaver over her.

This movie is so sweet and funny, watching it just fills me with giggly joy. Everyone is great in this movie and the humour is derived from the characters themselves and thier relationships. It's easy to forget that Oscar is 15, which adds to the effectiveness of the whole story. I love this movie, even though it kind of looks like crap. I don't think digital Hi8 recording was the best way to go with this film.