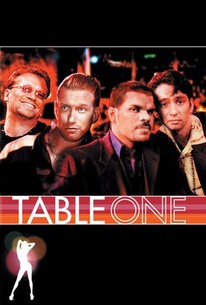 Film producer Michael Scott Bregman makes his debut as a writer/director with the straight-to-video crime comedy Table One. Jimmy (Stephen Baldwin), Rowdy (Michael Rooker), Xavier (Luis Guzman), and Norman (David Herman) are four friends struggling to make it in New York City. They pool their resources together to open a restaurant, hoping it will increase their chances of meeting women. When they come up a little short on money, they unwittingly take out a loan from a mobster (Burt Young). When the restaurant fails, the mob owners decide that a nudie bar would be more profitable.

Will Fonseca
as Club dancer

Cornelia Sharpe
as Fan of Freddie

Critic Reviews for Table One

Audience Reviews for Table One

There are no featured audience reviews yet. Click the link below to see what others say about Table One!