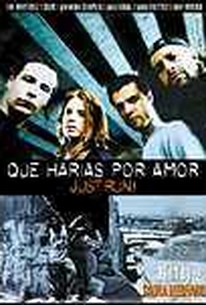 The seamy underside of drug dealing in Spain is explored in this Spanish drama. Thirteen-year-old Milio (Alberto Escobar) and his older brother Luis (Fele Martinez) run drugs in Madrid for wholesaler Don Vicente (Francisco Rabal). While their mother (Geraldine Chaplin) disapproves of their business, Luis tries to watch out for his little brother and shield him from the most dangerous side of the dope traffic. When one of their partners is killed, Luis becomes wary of the drug trade, and his girlfriend Sira (Silke) urges him to get out of the business while he still can. But Milio doesn't want to quit, and Luis isn't sure which way he should turn, especially after Don Vincente urges him to stay. Sira then tries to force Luis' hand by going out with another of Don Vicente's soldiers. The debut feature from Saura Medrano (son of the great Spanish filmmaker Carlos Saura), Just Run! had its world premier at the 2000 Cannes Film Festival. ~ Mark Deming, Rovi

There are no featured reviews for T qu haras por amor? , (Che faresti per amore?), (Just Run!) at this time.