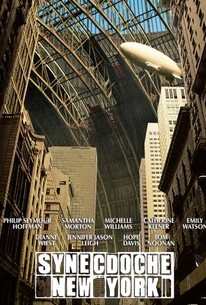 Theater director Caden Cotard is mounting a new play. His life catering to suburban blue-hairs at the local regional theater in Schenectady, N.Y., is looking bleak. His wife Adele has left him to pursue her painting in Berlin, taking their young daughter Olive with her. His therapist, Madeleine Gravis, is better at plugging her best-seller than she is at counseling him. A new relationship with the alluringly candid Hazel has prematurely run aground. And a mysterious condition is systematically shutting down each of his autonomic functions, one by one. Worried about the transience of his life, he leaves his home behind. He gathers an ensemble cast into a warehouse in New York City, hoping to create a work of brutal honesty. He directs them in a celebration of the mundane, instructing each to live out their constructed lives in a growing mockup of the city outside. The years rapidly fold into each other, and Caden buries himself deeper into his masterpiece, but the textured tangle of real and theatrical relationships blurs the line between the world of the play and that of Caden's own deteriorating reality.

Kaufman, who once dazzled us with his japester's invention, uses those same tools to do something else here. He leaves us reeling.

This is a classic Kaufmanesque work: bold, bizarre and utterly baffling.

Synecdoche, New York finally feels bitter, hollow and adolescent: like a gargantuan music video conceived for an emo band with a penchant for Pirandello.

Synecdoche (pronounced Sih-neck-doh-kee, by the way) is beautifully acted throughout, scripted by Kaufman with the same valorous unorthodoxy as his Eternal Sunshine of the Spotless Mind, and shot with real panache.

Somehow, because it resists unlocking, it feels more serious, troubling, significant. It's as funny as it's depressing. It's as brilliant as it is baffling.

A toweringly ambitious and bafflingly confusing film that gives a glimpse of the daily battles going on in the director's mind.

[W]ith Synecdoche, New York Charlie Kaufman has most certainly turned in one of the most beautifully realised, exquisitely made films of the year. Simply put, it's astonishing.

Kaufman's absurdly comic, achingly melancholy vision manages to be as universal and as all encompassing as the masterpiece that Caden can never finish.

The film very carefully sets up several interesting ideas, but then drops them as too many conflicting ideas become impossible to juggle.

As an example of failure, and delusion, it's fascinating but ultimately frustrating.

Even amid the complexity of his vision, there are moments of searing simplicity and emotional speechlessness that even the most hardened loner among us cannot fail to take to heart.

The movie is ungainly, but to appreciate it one has to swallow the whole purple pill. As inconsistent as it is, it's still more album than mix tape.

"Synecdoche, New York" is, by all accounts, the nightmare world of Charlie Kaufman's mind. Both writing and directing, Kaufman's inner psyche is so unhinged that the result is a film so insane, so overambitious, so all-reaching and meta that its impossible to not be amazed by it, but its easy to be frustrated by it's all-consuming , baffling, abstract, fragmented wholeness.

You can tell that this film was meticulously drawn out but the final work is hard to comprehend. The film is existential to the max and only lets true scholars understand its true meaning which may make some bitter after watching such a film.

Now watch as Charlie Kaufman disappears up his own arse! With style. Full review later.