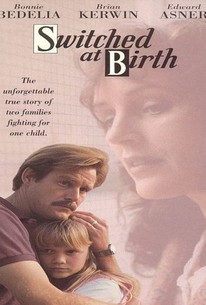 Switched At Birth is a made-for-television film based on a true story about two girls that were accidently switched in a hospital nursery after their birth, and were raised by the wrong parents for a decade. When one of the girls dies of a genetic disease, the parents realize that the child was not theirs, and they launch a search--and legal battle--to regain custody of their daughter.

Critic Reviews for Switched at Birth

There are no critic reviews yet for Switched at Birth. Keep checking Rotten Tomatoes for updates!

Audience Reviews for Switched at Birth

Seems like a made for TV movie in that it is really dramatic and emotional. It was based on a true story and I found it really interesting and well-done except there were a couple child actors who were very unbelievable in their character. I think they could have cast them better. The two main child actresses were phenomenal.