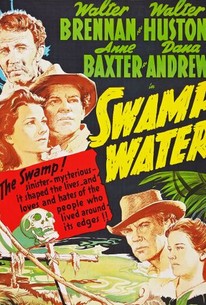 Noted French director Jean Renoir made his American debut with this 1941 film. Walter Brennan plays Tom Keefer, a man who is falsely convicted of a murder and sentenced to death by hanging. He has escaped from prison and is hiding out in Georgia's Okefenokee Swamp. Keefer is dedicated to finding the real killer and clearing his name. A trapper, Ben Ragan (Dana Andrews), is out searching for his dog when he finds Keefer hiding in the swamp. Ben believes the man's tale of being falsely railroaded. The two men trap animals, and Ben sells the furs, while his father (Walter Huston) eats the meat. Keefer tells Ben to give his share of the money from their pelt sales to his daughter, Julie (Anne Baxter). Ben eventually falls in love with Julie, arousing the wrath of Ben's girlfriend Mabel (Virginia McKenzie), who tells authorities about Keefer's secret. Ben, however, refuses to cooperate with officials' efforts to locate the escaped convict. Swamp Water was released in Great Britain under the title The Man Who Came Back. It was remade in 1952 as Lure of the Wilderness, with Brennan playing the same role.

Sherman Sanders
as Caller
View All

[Renoir's] first American film... almost feels like the work of someone else, although it still contains a few of its maker's signature themes, and it's an excellent entertainment in any regard.

ean Renoir's Swamp Water stands out as an example of how an artist's genius can assert itself even when his product has been taken away from him,

If Renoir was left alone from Zanuck's heavy hand, this melodrama would have perhaps turned out to be an American classic.

Good atmosphere and cast help this one out.