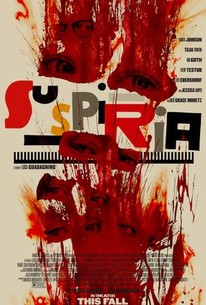 A darkness swirls at the center of a world-renowned dance company, one that will engulf the troupe's artistic director (Swinton), an ambitious young dancer (Johnson), and a grieving psychotherapist (Ebersdorf). Some will succumb to the nightmare. Others will finally wake up.

Kajganich is a purveyor of pretentious piffle.

Suspiria is too long, too empty with false fullness - those big themes that swell the stomach while providing no nutrition - and too keen to be visually and viscerally delinquent at every opportunity.

Popular genres start to die the moment they become respectable and in that light, Luca Guadagnino's gory Suspiria is all the confirmation needed that the golden era of the splatter movie belongs to the past.

The Argento is a marvel of style-as-subject; Guadagnino subjects audiences to second-hand shocks.

A film that tries to be as experimental as its namesake but botches its storytelling and pacing decisions.

In creating its own curious mix of history, supernaturalism, queerness and style, the film deserves to be celebrated as an original, truly fearless piece of cinema.

Yet, despite the fantastical, nightmare images, this remake ultimately seems to be more of an exercise in filmmaking than storytelling.

I think the film has loads of potential, but is too bloated as of now.

It's dark, tense, and oozes of evil.

This one you probably didn't see coming. (Or, honestly probably didn't see at all.) Suspiria is a remake of a cult classic 1977 Italian horror film of the same name by Dario Argento. This time around it's helmed by Luca Guadagnino hot on the heels of his success from Call Me by Your Name. Both focus on a young American ballet student entering a mysterious European dance school that is really a front for a coven of witches. But as where the original was a vivid, colorful fairy tale turned nightmare, the remake is a cold, desaturated historical allegory set against the backdrop of the German Autumn of (you guessed it) 1977, during the doomed Red Army Faction uprising. It is very much a modern European art horror picture, and therefore, not for everyone. Suspiria 2018 doesn't bother much with the mystery of the coven, nor is it interested in jump scares. Nope. This film is fully content to freak you the hell out with the PAINFUL things that it does to human bodies and what it does to our protagonist's mind. Hereditary made a splash for being a polarizing art horror film with disturbing imagery, but Suspiria honestly one-ups it completely on that front, though in a far messier fashion. In addition to centering around women, expressionist dance, and freaky supernatural shit, Suspiria also has a lot to say about the changing face of post-war Germany and generations of guilt. It's truly bizarre to go directly from violent street protests to a HELL of a witches' sabbath (that is somehow freakier than the one that ended The Witch) and not seem tonally inconsistent. Guadagnino manages that with finesse. Dakota Johnson has a lot going on in this unconventional role and the odd but rapturing back-and-forth with her obsessive mentor (Tilda Swinton) forms the true meat of the story. There are a lot of character actors doing God's (or someone else's) work here and I feel guilty not being able to do them justice. Either way, it's a shame it left theaters so quickly and it deserved better for the all the time and resources that went into it. Catch it on blu-ray or your preferred streaming service if you got the sand. All of them...witches.

AUTUER! AUTEUR! - My Review of SUSPIRIA (4 Stars) Whoever said the auteur theory is dead hasn't been paying attention lately. With films like ROMA, MOTHER!, and now SUSPIRIA, directed by Luca Guadagnino (CALL ME BY YOUR NAME, A BIGGER SPLASH) and written by David Kajganich (THE TERROR), handily demonstrating that even in the current state of cookie cutter cinema, a lucky few filmmakers get to do whatever the fuck they want. There's no other way to explain this absolutely bonkers, not for everyone, ever so loosely-based and ever so singular remake of Dario Argento's 1977 horror classic. At over 2 1/2 hours, SUSPIRIA over indulges for sure, but with such visionary, visceral work on display, when I wasn't cringing in disgust, I found myself chuckling with glee. Set in a divided 1970s Berlin, SUSPIRIA opens with a distraught young woman named Patricia (an unnerving Chloë Grace Moretz) seeking the help of her therapist, Dr. Klemperer (Tilda Swinton, magnificent in a triple role tour de force). Mumbling incoherently, she disappears from the West Berlin Markos Dance Academy, leaving a vacancy. Enter Susie Bannion (Dakota Johnson), the daughter of Mennonites, who leaves her protective Ohio environment for a chance at a spot in the company led by the enigmatic Madame Blanc (Swinton again). Susie's waifish innocence contrasts greatly with the all-female troupe and Blanc's well-worn, blowsy support staff, yet one audition later and suddenly she finds herself named the "It Girl", capturing Blanc's attention and the lead in their next performance. Johnson's role is largely visual with only spare amounts of dialogue, but she's perfect. Like her mother, there's no hiding her gentle, vulnerable qualities, and it's what makes her a great movie star. You just want her to naively move across the ocean and make a splash. Clearly, though, something is amiss, when this dance school turns out to contain a coven of witches. We hear the whisperings right away, but Susie seems oblivious or perhaps in denial. She just wants to dance goddammit! When she performs a solo on the troupe's signature piece, however, a dancer trapped on the floor below her, experiences bone-crunching, contorted torture with every one of Susie's spins, leaps, or reaches. Special kudos to the sound mix and the haunting score by Radiohead's Thom Yorke, who is finally writing melodies again! [Radiohead fans, don't come for me!] Guadagnino, so skilled in his past work at evoking sights, sounds, smells, and texture in his masterful imagery, brings a profound sense of dread to the horror genre with a film with no real jump scares or traditional horror elements. Sure, it devolves into a veritable blood bath late in the film (told in 6 chapters and an epilogue), but SUSPIRIA is more interested in the horror of male guilt and of female rage. It overstuffs its messaging with references to the Holocaust, the Cold War, to the 1970s Lufthansa Hostage Crisis, and the Red Army Faction bombings, but the through line remains. Women will no longer remain silent in this world as they course correct from generations of humiliation and sublimation. SUSPIRIA is the ultimate #metoo film with the message of, "Join us or die, and men, we're gonna grab you by the dick for a change." SUSPIRIA, thanks to Guadagnino's incredible skills as a director, feels original, despite at times feeling like the bastard child of the "Satan's Alley" sequence from STAYING ALIVE and ROSEMARY'S BABY with a dollop of THE NEON DEMON thrown in for good measure. Swinton's Madame Blanc exudes such sweet, gentle empathy even when in charge of bloody murders. It's female empowerment revenge with a measure of compassion for those she opposes. Yes, this film even has empathy for men, especially for Dr. Klemperer, who has a guilty past with a woman who provides a wonderful surprise of a cameo. Swinton's performance as Klemperer remains key to the surprising amount of kindness this film has to offer. You don't expect that out of a very bloody, over-the-top horror film, but SUSPIRIA, as nutty as it is, makes room for it. Despite a couple of minor roles played by men, every major part goes to a woman. I wondered why it wasn't also directed by a woman, but Guadagnino, a gay man, doesn't have the same male gaze as some of his straight counterparts, and besides, I just want to follow his voice as a filmmaker wherever it takes him. Many will absolutely hate the movie. If you hated EXORCIST II: THE HERETIC but applauded its audacity, you may have the same feelings for SUSPIRIA. On the surface, it's monumentally silly and so so long, but it's a story told by a filmmaker brimming with passion and creativity. Guadagnino chooses to stage dialogue scenes where the actors speak to each other in voiceover. One of the biggest dramatic moments contains no dialogue at all, as Swinton and Johnson stare each other down across a crowded restaurant table. There are plenty of flash cut montages, body horror, stabbings, and oceans of blood, but this film maintains the real horrors are our collective pasts. Let women rule the world, the film seems to be saying, but make no mistake. There will be blood. Lots and lots of blood.

Bares only a slight resemblance to the original, but that's because Guadagnino found more things to explore, specifically how national guilt manifests itself in individuals.. A little overlong perhaps, but by the time that truly bonkers finale roles around I found myself invested in the madness of it all.