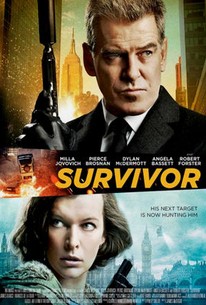 Critics Consensus: Borrowing heavily from better films in service of a predictable story, Survivor will struggle sustain the interest of even the most avid action thriller fans.

Critics Consensus: Borrowing heavily from better films in service of a predictable story, Survivor will struggle sustain the interest of even the most avid action thriller fans.

Critic Consensus: Borrowing heavily from better films in service of a predictable story, Survivor will struggle sustain the interest of even the most avid action thriller fans.

After being mysteriously framed for a terrorist bombing, a Foreign Service Officer (Milla Jovovich) must evade government capture and death by a ruthless assassin (Pierce Brosnan) in order to stop the real perpetrators' master-and much deadlier-plan. SURVIVOR is directed by James McTeigue and also stars Dylan McDermott, Angela Bassett and Robert Forster. (C) Official SIte

Parker Sawyers
as Ray
View All

New On DVD and Blu-Ray: Survivor, Timbuktu, and More
Critics Consensus: San Andreas Looks Great, But Its Script Is Shaky

Survivor is the kind of film that relies on characters doing everything in a needlessly complicated way.

It's a lumberingly dated kind of spy thriller, convoluted without ever being intriguing - and an insufficient number of bangs for your buck.

Oh, how you'll laugh at the dialogue, at the plot and - most of all - at Pierce Brosnan's moustache, which is so hilarious it deserves a film of its own.

Pretty much plays like a film made for basic cable that is buoyed for a while by a couple of relatively strong central performances before eventually succumbing to terminal mediocrity in its silly final scenes.

The countdown ending is groan-inducing, as are a number of things leading up to it.

Firmly within the so-bad-it's-alright genre, Survivor is a beast of a simpler time. Brosnan and his moustache are fine, but nothing else really is.

While it will keep you suitably entertained, Survivor doesn't really bring anything new to the genre. At least director James McTeigue moves the story along at a gripping pace.

Ultimately, Survivor is not so much high-octane action as a slow fizzle.

Survivor has very little to ride on; succumbing to action-genre-conformism, the film almost takes itself too seriously in a genre that works best when it doesn't belittle the intelligence of its audience.

Brosnan has a good time hamming it up as a heartless assassin, but why Jovovich is forced to spend the whole film darting around with black smudges on her face is a mystery.

Leave it to Cinemax Taiwan to air the only action/espionage movie in existence where Milla Jovovich doesn't kick even a little bit of ass. Milla is a mild-mannered government employee who inexplicably goes on the run after getting framed for terrorist crimes she didn't commit, and dubiously mustachioed Pierce Brosnan is hot on her very pedestrian trail. Eh.

Imagine James Bond, license to kill, gone to work for the bad guys, as Brosnan plays an deadly assassin chasing a U.S. government employee (Jovovich, simply a damsel in distress in this piece) all over London. The flaw in the work is that he's got to miss her, and miss her over and over again, for there to be any film to watch at all. Nobody's perfect. Let that little imperfection slide and its still a decent action piece.

Its great old-school escapism. An explosive, exciting and action-packed cat and mouse thriller. A clever and suspenseful treat that has Brosnan and Jovovich facing off. Pierce Brosnan is terrific, he is a one-man Terminator that raises all sorts of hell and plays a brilliantly badass villain. Milla Jovovich is sensational, she plays a different type of hero in this film and does it well. It's an engaging and solid thrill-ride that makes for a fun 96 minutes of fun.

Entertaining to a point, then you start feeling how you are going to survive this film!