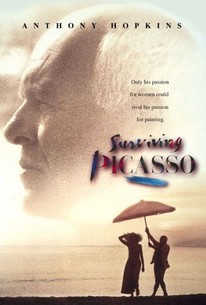 This unusual biography of the renowned Spanish artist Pablo Picasso is a Merchant-Ivory film. The team of director James Ivory, producer Ismail Merchant, and screenwriter Ruth Prawer Jhabvala has been responsible for many period dramas, including A Room with a View and Howard's End. The story of Picasso's remarkable misanthropy is told as experienced by his mistress Francoise Gilot (Natasha McElhone). Francoise was Picasso's lover from 1944 to 1954, and they had two children together, Claude and Paloma. The film shows Picasso (Anthony Hopkins) as a notorious womanizer, with flashbacks revealing his relationships with his wife Olga (Jane Lapotaire), the artist Dora Marr (Julianne Moore), and Marie-Therese Walter (Susannah Harker), an earthy type who sees the artist only on Sundays. Hopkins powerfully portrays Picasso as an artistic genius with an appalling habit of using and abusing women. He not only cheats on his wife but two-times his mistresses. Francoise has survived an abusive relationship with her father (Bob Peck), and she is 40 years younger than Picasso when they become lovers. The film was supposed to be based on Gilot's book Life with Picasso, but the filmmakers were unable to get the rights to it, so they settled for basing the film on Arianna Huffington's Picasso: Creator and Destroyer. The movie also uses imitations rather than Picasso's real paintings. ~ Michael Betzold, Rovi

...a stunning debut by Natascha McElhone...

When it is over we are left with the conclusion that if Picasso had not been a great artist, this story would not have much mattered; as a beast toward women, he was nothing special.

Surviving Picasso not only fails to entertain; it puts the artist and his work at considerable risk by playing into the hands of modern-art-haters, in this respect like the book on which it claims to be based.

Ambition notwithstanding, Surviving Picasso fails prodigiously, mostly out of its own confusion over who it is about and what it wants to say.

Covers ten turbulent years in the life of this major luminary of 20th century art.

Like a movie star, Picasso had many relationships. This movie is about one of those relationships in fact, between Picasso at 60 and a 20's year old Francoise. I cannot believe how dependant on Picasso the mistresses are, but there is hope in the heroine of the movie.