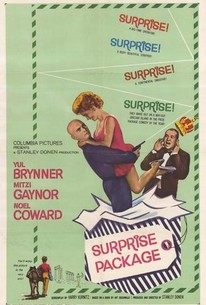 This is an unimpressive spy-comedy from director Stanley Donen who inserts his specialty, a small song-and-dance number, into the odd proceedings. Gangster Nico March (Yul Brynner) has been ordered out of the United States because of his unsavory activities and back to the Greek island from whence he came (actually Rhodes). Once on the island, various characters enter the picture, including a local, corrupt police chief. Nico decides to send for a bundle of money left in the States but his double-crossing "friends" send him a bundle of feminine wiles instead, Gabby Rogers (Mitzi Gaynor). Obviously, Nico is none too pleased with the lousy substitution for hard cash, though he does not yet realize he is sure to fall in love with her. ~ Eleanor Mannikka, Rovi

Lionel Murton
as US Marshal

Barry Foster
as US Marshal

Lyndon Brook
as Stavrin
View All

Because of clumsy scripting, there are absolutely no surprises in this celluloid package.

There are no featured reviews for Surprise Package at this time.