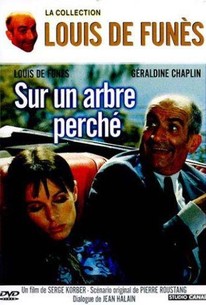 French comic Louis De Funes stars as Henri, who has a very unfortunate accident while on his way to arrange some sort of shady deal on the Italian border. He has tried desperately not to let his better impulses get control of him; nonetheless, he has already picked up a hitchhiker (Olivier De Funes) and a married woman in distress (Geraldine Chaplin) when his car runs off the road, falls over a cliff, and lands in the crown of a tree. The efforts of this threesome to cope with the situation and get rescued constitute the body of this film. ~ Clarke Fountain, Rovi

There are no critic reviews yet for Sur un arbre perché (Perched on a Tree). Keep checking Rotten Tomatoes for updates!

There are no featured reviews for Sur un arbre perché (Perched on a Tree) at this time.