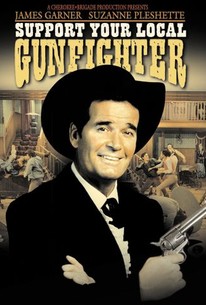 This Western action/comedy is told in the same tongue-in-cheek manner as its predecessor, Support Your Local Sheriff. Goldie (Marie Windsor), a madam, is a formidable woman, and Latigo Smith (James Garner) knows perfectly well that his disreputable ways will be trimmed considerably should she succeed in marrying him. Instead, he escapes from her and winds up in the town of Purgatory. The town's inhabitants have been expecting the arrival of Swifty Morgan (Chuck Connors), the famous gunfighter. All things being equal, Latigo is happy to be mistaken for Morgan's sidekick, while Jug May (Jack Elam) impersonates Morgan himself.

Jack Elam
as Jug May

This follow-up has trouble getting out of the gate but eventually hits its stride.

This genial Western comedy is a disappointing successor, not a sequel, to Support Your Local Sheriff.

Gunfighter is directed by Burt Kennedy who specializes -- but not well -- in comedy westerns and whose style, such as it is, is clearly derivative.

some funny moments but doesn't have the heart the first team up had, funny at times but definitely a step down compared to support your local sherriff.

Caught this on TMC the other night, and was really loved it. A very funny western spoof with a lot of heart.