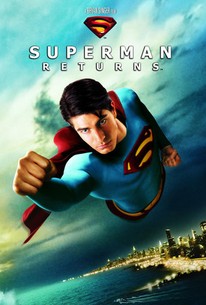 Following a mysterious absence of several years, Superman comes back to Earth -- but things have changed. While an old enemy plots to render him powerless once and for all, The Man of Steel faces the heartbreaking realization that the woman he loves, Lois Lane, has moved on with her life. Or has she? Superman's bittersweet return challenges him to bridge the distance between them while finding a place in a society that has learned to survive without him. In an attempt to protect the world he loves from cataclysmic destruction, Superman embarks on an epic journey of redemption that takes him from the depths of the ocean to the far reaches of outer space.

Jack Larson
as Bo The Bartender

Mirren Lee
as Vanderworth Relative No. 1

Steve Ostrow
as Vanderworth Relative No. 2

Hank Roberts
as Vanderworth Relative No. 3

Lee James
as Doctor No. 1

Michael Duggan
as Doctor No. 2

Keegan Joyce
as Boy With Camera

Ted Maynard
as News Anchor No. 1

Ed Wightman
as News Anchor No. 2

Prue Lewarne
as News Anchor No. 3

Paul Shedlowich
as News Anchor No. 4

Barry Quin
as News Anchor No. 5

Francine Bell
as News Anchor No. 6

Genevieve Davis
as Reporter At Deli

Kevin Fisher
as Security Guard No. 1

John Lucantonio
as Security Guard No. 2

The battle is won: but only just.

Logical progression, intelligent reappraisal, and nostalgia trip all in one, Superman Return is better than we dared hope.

Singer's revival of childhood wonder and timeless heroism [is] an extraordinary feat of movie magic.

The movie may not be a single-bound building-leaper but Bryan Singer reconfigures the daddy of all comic-book sagas into something knowing, witty, and even sensitive.

What could possibly justify making a Superman movie that runs 154 minutes? Plenty of films last longer, but their characters are generally sharp enough to recognize a guy with or without his glasses.

The film is long. The pace is slow. The mood is solemn. But the action is edge-of-the-seat.

Nikhat Kazmi
The Times of India

It is beautifully shot. [Full Review in Spanish]

The biggest problem with Superman Returns is the script, which bogs down in the love story and forgets the action -- which should be the strong point.

One blockbuster that actually delivers.

Overall not a terrible watch but a little bit dry.

The man doesn't have an ounce of charisma and at best can only be described as an expressionless log of wood. In retrospect, I'd settle for our own delectable Hrithik.

Rethinking this one (as any serious Supes fan should) and I come to the conclusion that Singer has crafted simply the best Superman ever made, best superhero story ...in any medium. The plane sequence at the beginning leaves me breathless. Sorry, it took me so long to get it, Bryan, and thx for the hard work. Cue the Tina Turner song now...

Superman is always fun to watch, and I didn't mind the new Clark Kent and Lois Lane.

Okay, so I'll just say right off the bat that, despite this movie's flaws, Singer should be applauded for being allowed to make the film he wanted to make, even if it's not the film the public was hoping for. Designed as a contemporary update, yet also a bridge to the older Superman films, this is part retelling of the origin/a sequel to the first two Superman movies, completely ignoring parts 3 and 4. That's pretty ambitious, and rather admirable. They stick so much to the past that they reuse the original music and opening credits/font. As a result of all of this, the film is pretty heady, but, like I said, admirable. The main issue with the film, aside from sticking too much to the past, is the fact that it's sadly really boring. It's long, slow, largely uneventful, and drags on and on and on. That they made an arthouse-style Superman film is unique, but come on! He doesn't even punch anyone! He's just a whiny, mopey, angsty stalker for a lot of the time, and that's far from what people expect when they think of this character. The casting is alright though. Routh looks the part, and has the charisma, but he really doesn't do much to make the role his own. I thought Bosworth was okay as Lois, but the ignorance the character displays doesn't fit with the character supposedly being a bright journalist. What I mean is, it takes her forever to realize who the father of her kid is, when the answer is painfully obvious early on. Spacey is fun, if perhaps a tad too hammy as Lex, but I'm sure they could have found someone worse. All in all, I appreciate this film trying to mix old and new, but I just think they could have done a far better job making it entertaining. I'd say that the ideas were sound, but the execution, especially the writing (tons of plot holes and flaws) kept things from being as great as they should have been.