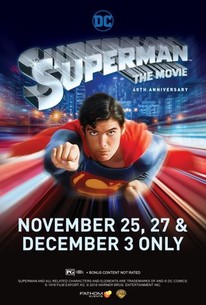 Fathom Events and Warner Bros. are bringing Superman the Movie 40th Anniversary to select cinemas nationwide for a special three-day event including the 1941 Max Fleischer Superman animated short "The Mechanical Monsters"! From the doomed planet of Krypton, two parents launch a spaceship carrying their infant son to earth. Here he grows up to become Clark Kent, mild-mannered reporter for the Metropolis Daily Planet. But with powers and abilities far beyond those of mortal men, he battles for truth and justice as Superman.

Christopher Reeve IS Superman, but although he makes the other guys who've donned the suit look like chumps in the original, the movie overall is no Superman II, which is rad.

There are no featured reviews for Superman 40th Anniversary at this time.