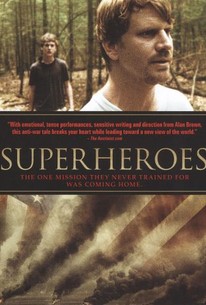 The Thin Red Line star Dash Mihok takes the lead in director Alan Brown's small-scale anti-war drama following a young Iraq War veteran whose psychological scars run far deeper than his still-tender shrapnel wounds. Ben (Mihik) has just gotten back from Iraq, though it will be some time before his brain catches up with his body. Hoping that by opening up to other veterans he will be able to leave his traumatic past behind and move forward with life, the shell-shocked Ben starts attending group therapy sessions videotaped by naïve young filmmaker Nick (Spenser Treat Clark). But while the talkative Nick and the withdrawn Ben are without question polar opposites, a connection is formed and Nick ultimately accompanies Ben to an isolated country home where the haunted veteran plans to convalesce. Over the course of their time together, Ben learns the importance of reaching out for new friendships as Nick discovers the value of human connections. But can their blossoming friendship survive as Ben does his best to contend with some of the most difficult issues he's ever faced?

James Yaegashi
as James
View All

There are no critic reviews yet for Superheroes. Keep checking Rotten Tomatoes for updates!

There are no featured audience reviews yet. Click the link below to see what others say about Superheroes!