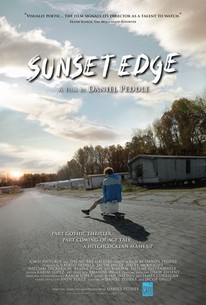 On a lazy afternoon, two tales intertwine in this meditative portrayal of disaffected youth set in a graveyard of abandoned mobile homes known as Sunset Edge. Four suburban teens rummage through the decay completely unaware of the shadowy figure that moves among them - a tormented soul with a horrific past. Day turns to night and people disappear as the secrets of Sunset Edge are revealed in a haunting finale. Part gothic thriller, part coming-of-age tale, SUNSET EDGE is a Hitchcockian mash-up that upends teenage horror films. Shot entirely on location in North Carolina, the director's Southern roots are the inspiration for the film. In setting his story amidst the rural decay of this pastoral landscape, Peddle captures a poignant snapshot of American culture. He manipulates time and linearity to create a gripping, layered story. Using only available natural light, he doesn't rely on special effects or gore to enhance the drama or tension. The sparse dialogue gives his characters a natural quality, permitting the audience the vantage point of unseen observer. (C) Cavu

William Dickerson
as Will

Lilianne Gillenwater
as Dora May Moon

Sunset Edge has a visually poetic quality that goes a long way towards compensating for its opaquely nonlinear, barely there narrative.

An unusual, ambitious failure, mostly because the film's hyper-naturalistic style is meant to evoke a supernatural mood.

Full of striking images but badly overestimates the entertainment value of abandoned trailer parks for the average moviegoer.

A densely atmospheric portrait of disaffected youth by artist-filmmaker Daniel Peddle that flouts preconceived notions at every unconventional turn.

As uninterested in examining its chosen milieu as it is in fashioning anything approaching an engaging narrative.

The one thing that's lacking? A payoff. [But] director Daniel Peddle gets great performances from his non-professional cast and expertly builds a taut and disturbing atmosphere.

This resolutely lo-fi and hauntingly lovely movie . . . ventures instead into the hypnagogic minimalist territory of other beautiful head-scratchers like Last Year at Marienbad or Picnic at Hanging Rock.

The movie is being pushed by its makers as "Hitchcockian," but that's hardly the case. If anything, the film's natural look, isolated setting and supernaturally tinged tale bring to mind The Blair Witch Project far more than any Hitchcock endeavor.

"Sunset Edge" is meditative and introspective DIY filmmaking at its finest.

There are no featured audience reviews yet. Click the link below to see what others say about Sunset Edge!