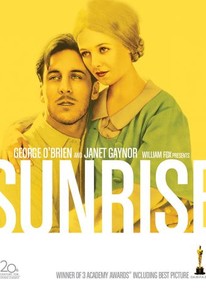 Considered by many to be the finest silent film ever made by a Hollywood studio, F.W. Murnau's Sunrise represents the art of the wordless cinema at its zenith. Based on the Hermann Sudermann novel A Trip to Tilsit, this "Song of Two Humans" takes place in a colorful farming community, where people from the city regularly take their weekend holidays. Local farmer George O'Brien, happily married to Janet Gaynor, falls under the seductive spell of Margaret Livingston, a temptress from The City. He callously ignores his wife and child and strips his farm of its wealth on behalf of Livingston, but even this fails to satisfy her. One foggy evening, O'Brien meets Livingston at their usual swampland trysting place. She bewitches him with stories about the city -- its jazz, its bright lights, its erotic excitement. Thrilled at the prospect of running off with Livingston, O'Brien stops short: "What about my wife?" Drawing ever closer to her victim, Livingston murmurs "Couldn't she just...drown?" (the subtitle bearing these words then "melts" into nothingness). In his delirium, the husband agrees. The plan is to row Gaynor to the middle of the lake, then capsize the boat. Gaynor will drown, while O'Brien will save himself with some bulrushes that he'd previously hidden in the boat; thus, the murder will look like an accident. The next day, the brooding O'Brien begins slowly rowing his unsuspecting wife across the lake. Halfway to shore, he makes his intentions clear, but is unable to go through with it. As his wife cringes in terror, O'Brien rows to the other side of lake. Once ashore, she runs away from him in terror, as he stumbles after her, trying to apologize. Gaynor boards a streetcar bound for the city, with O'Brien climbing aboard a few seconds afterward. Upon reaching the city (a renowned set design), O'Brien continues trying to make amends to his wife. They sit disconsolately at a table in a restaurant, unable to eat the plate of cake that is set before them. Slowly, Gaynor begins overcoming her fear. The couple wander into a church, where a wedding is taking place. Breaking down in sobs, O'Brien begins repeating the wedding vows, thereby convincing Gaynor that she has nothing to fear. Together again, the couple embraces in the middle of a busy street, oblivious to the honking horns and irate motorists. Anxious to prove to each other that all is well, the husband and wife spend a delightful afternoon having their pictures taken and "dolling up" in a posh barber shop. They cap their unofficial second honeymoon at a joyous festival in an outsized amusement park. More in love with each other than ever before, O'Brien and Gaynor head back across the lake in the dark of night. Suddenly, a storm arises. Pulling out the bulrushes with which he'd planned to save himself, O'Brien straps them onto Janet, telling her to swim to shore. The storm passes. Washing up on shore, the unconscious O'Brien is brought home. But Gaynor is nowhere to be found, and it is assumed that she has died in the storm. Half-insane, O'Brien strikes out at Livingston, the instigator of the murder plan. Just as he is about to throttle the treacherous temptress, he is summoned home; his wife is alive! As Livingston stumbles out of the village, O'Brien and Gaynor cling tightly to one another, watching the sun rise above their now-happy home. Together with Seventh Heaven, Sunrise earned Janet Gaynor the first-ever Best Actress Academy Award, while Charles Rosher and Karl Struss walked home with the industry's first Best Photography Oscar. The film itself was also in the Oscar race, but lost out to the more financially successful Wings.

Janet Gaynor
as The Wife

George O'Brien
as The Man

Margaret Livingston
as The Woman from the City

Jane Winton
as The Manicure Girl

Arthur Housman
as The Obtrusive Gentleman

Eddie Boland
as The Obliging Gentleman

News & Interviews for Sunrise: A Song of Two Humans

View All Sunrise: A Song of Two Humans News

Critic Reviews for Sunrise: A Song of Two Humans

From two points of view, Sunrise is among the most remarkable films that have ever been flashed on the screen. One is the rich, sensitive beauty of the photography;, the other 'he tragic tenseness of the story.

The film is electric: overwhelmingly passionate and sexual.

Rich, strange and gorgeous, F.W. Murnau's Sunrise shows what an artist of the late silent era could accomplish cinematically, backed by an open checkbook and fueled by the highest aspirations even in the simplest of morality tales.

For his Hollywood début, in 1927, the German director F. W. Murnau brought a slender story to life with a breathtaking display of cinematic virtuosity, creating one of the masterworks of the art form.

F.W. Murnau's career-peak nova, the crowning film from that sacred, edge-of-the-abyss year of 1927.

In its artistry, dramatic power and graphic suggestion it goes a long way toward realizing the promise of this foreign director in his former works, notably Faust.

This partly expressionistic masterwork is often considered one of the greatest of all silent films.

Not since the Cabinet of Dr. Caligari and the Last Laugh, those two European products of cinema art, has the screen offered anything that is even remotely comparable to Sunrise, from any or all angles.

The dramatic might of the Fox film, Sunrise.. lies in the severe simplicity of its fascinating plot.

An extraordinary blending of the figurative, the imaginative, and the real.

Without the need to play his story out in a thoroughly realised reality, Murnau uses illusion and the poetry of his medium to communicate the themes of his modernist fable.

Murnau's imaginative vision of the crazy world of the capital... is reflected on lively and at times incredible images that are plagued with humor and a certain cruelty. [Full Review in Spanish]

Audience Reviews for Sunrise: A Song of Two Humans

The ultimate silent film, released right after the talkies had already become a reality. Featuring some splendid superimpositions and impossible camera movements, this wonderful movie is both an impressive technical achievement and a beautiful story about love.

At his mistress's command, a man takes his wife on a boat ride in order to kill her, but he decides against it, and they have a lovely afternoon together. While the cinematography is quite charming and the superimposed images were probably revolutionary and striking in their time, the story of Sunrise is streamlined and not that interesting. We know early that the man isn't going to kill his wife, so there isn't any suspense on the boat, and what follows lacks any real, compelling conflict. Overall, for its technical achievements, Sunrise has been rightly praised, but its emotional effect is pretty close to nil.

Quite simply beautiful. One of very few honest and poignant true love stories in cinema. It is very slow paced but highly worthwhile for its moments of romance, humour, tragedy and beauty. Murnau created a timeless silent film that stands up as perhaps one of the greatest films ever made.

Did you say 1927? Are you kidding me? Murnau's first American film is a visual masterpiece and decades ahead of it's time. From the expressionist influenced set designs, to the use of superimpositions, and the masterful use of the camera, this film is a visual feast. The story isn't strong enough to keep one enthralled throughout the entire picture, but is a testament to the supreme visual power of silent cinema.