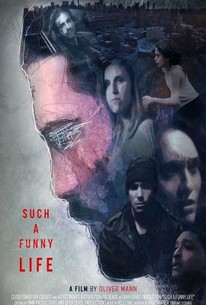 Such a Funny Life Videos

David Gutierrez is an up and coming New York stand up comic who is funny on stage, but off stage he struggles in dire straits: the death of his sister Gabriella, his Autistic mother Mariah in a mental institution and the disappearance of his abusive father Ralph that connects David with his street smart friend Rob Parker. As things worsen for Maria in the mental institution and betrayal comes between David and Rob, David flees to Los Angeles to hone his craft and leave it all behind until years later he gets a life changing phone call to return back to New York until his dark past catches up with him. There's always a price for talent.

Critic Reviews for Such a Funny Life

Mann, an emerging Latino filmmaker, exhibits signs of vocation for the craft that could lead to a more fruitful product some day. For now, what he serves is a tortuous trick with a confusingly dark punch line for an ending.

With a running time of just over eighty-three minutes, this is a digestible film. It manages to draw you into David's life within the first fifteen minutes and doesn't feel like a drag.

Up to the final scene, the film seems to just barely miss the mark in the place where it could have thrived.

There are no featured reviews for Such a Funny Life at this time.

Such a Funny Life Quotes