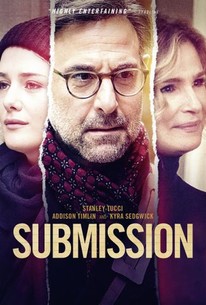 Critics Consensus: It's thoughtful and well-acted, but Submission falls frustratingly short in its attempt to offer insightful commentary through its timely premise.

Critics Consensus: It's thoughtful and well-acted, but Submission falls frustratingly short in its attempt to offer insightful commentary through its timely premise.

Critic Consensus: It's thoughtful and well-acted, but Submission falls frustratingly short in its attempt to offer insightful commentary through its timely premise.

Ted Swenson (Stanley Tucci) is a once-acclaimed author who teaches writing at a small liberal arts college. Though his marriage to Sherrie (Kyra Sedgwick) is comfortable, he finds himself drowning in discontent--stuffy departmental dinners at which he drinks too much, smug colleagues whom he dislikes yet fears he resembles, and an endless stream of students who are as untalented as they are unteachable. But when a new pupil, Angela Argo (Addison Timlin), showspromise Ted focuses on nurturing her career, and she appears more than willing to devote the one-on-one time required. Basking in Angela's youth, talent, and admiration, just as she benefits from Ted's wisdom, experience, and professional connections, it's only a matter of time before lines are crossed and it becomes unclear whether Ted is predator or prey and Angela is victim or victimizer. Based on the acclaimed novel "Blue Angel" by Francine Prose, which slyly updates the 1930 Marlene Dietrich/Josef Von Sternberg classic for today's politically correct times, SUBMISSION is a biting morality play about lust, ambition, power, and living in a world where scandal is as likely to make a reputation as destroy it.

A seriously considered film brimming with ideas worth examining.

Tucci and Timlin are both quite good in their roles, and writer-director Richard Levine (adapting Francine Prose's 2000 novel "Blue Angel") does an excellent job of slowly escalating the pair's relationship.

Honoring the primacy of language for his characters, Levine deftly reveals the ways they wield it to seduce, attack, manipulate, repress and, occasionally, to communicate.

For a movie addressing themes singularly suited to this moment, it's all the more disappointing when it whiffs those chances.

The film squanders some dramatic possibilities and has a truncated sense about it. We are left to wonder whether something went wrong with the script, or in the editing room, or both.

Submission is so desperate not to become a cliché that it ultimately wastes a golden opportunity to become something more.

Levine's script misses the opportunity to get in the ring and wrestle with the messy place occupied by consensual but regrettable sex.

Tucci and company make the film compelling, and although we know where things are headed, the occasional detour here and there makes for an interesting journey.

There should be more outrage, more compassion, more something - yet the film can't capitalize on its hot-button premise.

Submission lacks the insight and perspective to become a movie that represents "now." When the current cultural, political, and social climates are especially contentious, perhaps we need a movie that will address these issues head-on.

Submission is a fine film held back by a script full of convenient plot developments and flimsy writing; a cautionary tale for the consequences of men thinking with their junk too much

...viewers will most likely overlook the strong performances by stars Stanley Tucci and Addison Timlin and instead focus on the wasted opportunity to say something important about this moment in our time.

There are no featured audience reviews yet. Click the link below to see what others say about Submission!