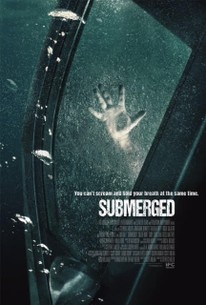 A limousine joyride goes berserk in this breathless, pulse-pounding thriller. An ex-soldier turned bodyguard is hired to protect a young woman. But while cruising with a group of friends one night, their stretch limo is run off the road and underwater by a gang of ruthless kidnappers - who then dive in to finish the job. Suddenly it's sink or swim, as the bodyguard must fight to keep the vehicle from becoming a watery grave.

Lauren See
as Red
View All

Submerged suffers from a misunderstanding that anyone would want to watch this movie seriously.

The jumbled chronology is the movie's biggest misstep. The writer and director don't seem to trust their own premise, jumping around in time to fill in the dull details of why the limo's in the drink.

As good as the concept might be, as strong as Bennett (best known as the object of Lindsay Lohan's affections in Mean Girls) is as the psychologically scarred and physically injured hero, Milam's screenplay just never finds a comfortable groove.

Save your breath and your time - let Submerged sink to the bottom of your to-watch pile.

Submerged is a whole mess of tension primed to leave viewers in an anxiety-induced pile of helplessness, which means it does its job pretty damn well.

Aquaphobes beware: Submerged is a strong contender for the title of "2015 Release Most Likely to Give You an Anxiety Attack."

Submerged has a great premise, which it promptly proceeds to screw up in every manner conceivable.

This isn't a very good movie in spite of a decent concept. It does play into the whole social structure and how rich businessmen do whatever they with the lives of the people they employ and how that can create some resentment towards the businessmen themselves, even if they aren't as heartless as some people might see them as. But that part of the concept isn't revealed until much later. Essentially, the film sees a group of friends and a bodyguard, hired to protect his boss', the businessman in question, daughter, find themselves stuck underwater in a stretch limo after being driven off-road by people trying to kidnap someone in exchange for ransom. The film is a fight against time as, somehow, they're stuck in a situation that they're able to get out of before the limo is pushed out to the ocean, they don't do a great job at explaining this, but let's just go with what they said. The film also does a shitty job at establishing a timeline, since there are flashbacks used as lead-up to how they found themselves in this situation, but they are absolutely THE worst part of the film. The bodyguard in question, really the main character, has this brother and they do flashbacks with him spending time with his brother that are literally the worst thing I've ever seen. Not that they were terrible, I mean they weren't good, I'm just saying the fact that in one flashback, the bodyguard's brother is happy. In the next flashback, he's getting into fights with bullies, with literally no mention of him having problems with bullies prior to this, then in the next flashback he's a drug dealer and in the last flashback he kills himself. There's seriously no rhyme or reason for these flashbacks. They don't establish anything that bleeds into the next flashback with the bodyguard's brother. It's really fucking terrible. And it's not like the rest of the flashbacks in the lead-up to the group finding themselves underwater are any better, they jump all over the place when it comes to chronology and it's not done in that clever Tarantino way, where he plays with your expectations and turns them around on you, it's done in an unskilled manner. But it is what it is, not all films are gonna be skillfully made and that's a fact of life. But if, at the very least, the film offered a compelling storyline or good acting, then it would've been fairly more enjoyable to watch. The problem with the story is the fact that the people pulling off this kidnapping are treated as out and out villains. And I'm not saying that they shouldn't have been treated as villains, but it's a very sensitive subject and something that's very real and for the film to try to portray it as black and white as it does is irresponsible. I can see both sides of the equation. I can see the fact that businessmen struggle to keep their business afloat and they have to make decisions that ends up affecting many families. But I can also understand the side of people who put in years, even decades, of work into a company, making their boss a billionaire, being thrown out like yesterday's garbage without any respect given to their contributions. I wish they would've done this in a smarter fashion, but it was not to be. With that said, the acting isn't really good. Johnathan Bennett, who plays the lead, is really quite a bad actor. He has next to no expression on his face. Nobody in the film is really good, but Bennett is easily the worst of them all and he's the fucking lead. So what does that tell you? I can't really recommend this movie, it's poorly written, poorly edited, poorly acted. They take a decent concept and make a convoluted mess out of it. I saw it on Netflix, so it doesn't sting as bad as it might have if I had to pay for it. Still, bad movie, you can do so much better than this.