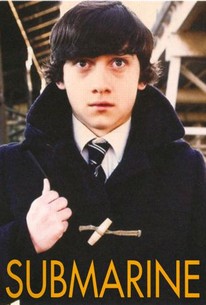 Fifteen-year-old Oliver Tate has two big ambitions: to save his parents' marriage via carefully plotted intervention and to lose his virginity before his next birthday. Worried that his mom is having an affair with New Age weirdo Graham, Oliver monitors his parents' sex life by charting the dimmer switch in their bedroom. He also forges suggestive love letters from his mom to dad. Meanwhile, Oliver attempts to woo his classmate, Jordana, a self-professed pyromaniac who supervises his journal writing - especially the bits about her. When necessary, she orders him to cross things out. -- (C) Weinstein

Sarah Pasquali
as Woman Who Looks Nothing Like Jordana
View All

All of this makes it sound as if Ayoade is trying much too hard but the gentleness of his touch succeeds in keeping pretentiousness safely out of the picture.

That rare teen comedy where the kids aren't gorgeous, the hero isn't heroic and the object of desire has a lot of reasons why she isn't necessarily desirable.

The result is a small, delicate comedy that depends on a continuity of tone that it pulls off. Oliver may not live happily ever after; but he manages to live happily enough here, and that's just fine.

An exercise in briny Welsh Weltzschmerz that tracks the inner and outer worlds of a confused teenage boy.

In its own right, "Submarine" is one of the best movies of the year.

This kid has traits that all of us remember on some level in our own adolescence. Writer/Director Richard Ayoade has crafted an adolescent reality.

The precociousness of Oliver and Jordana mirrors the visual art house polish and daring-daring do framing and styling of Richard Ayoade.

While emotionally powerful and incredibly affecting, Submarine doesn't lack for laughs, even, if at times, you'll not be ready for them.

The beauty of Submarine is all in the details, particularly the script's wry observations, which can be excruciating.

It's 97 minutes of absolute cinematic joy.

Oliver Tate: Her new boyfriend has an incredibly long neck. Just thinking about giraffes makes me angry.  "A comedy that doesn't let principles stand in the way of progress." Submarine is a great little coming of age story that honestly tells a tale of adolescent love and teenage problems. This is a film that isn't for everyone. It's a slow and contemplative movie that gets its laughs from the awkwardness of the protagonist who is entering his first relationship and doesn't really know how to go about it. The movie is refreshing in how it handles Oliver's life and how it presents him.  Oliver Tate is a fifteen year old boy living in Wales with his mother and father. At the start of the film, he explains that his parents haven't had sex in 7 months and that he monitors them and just about everything they do. He also does routine room checks of his parents room. Oliver also has another interest, and her name is Jordana. Soon the two start dating and eventually they even take it to the next step. The relationship is handled rather well on screen, and it seems like a legit 15 year old relationship. Oliver's world starts changing when his mother starts spending a lot of time with a guy she had a past with. Now, he needs to save his parents relationship and hopefully his own. This movie is beautifully made, with wonderful cinematography and fitting music. There's also a wonderfulness to the dialogue. It seems so honest and real. There's no big speeches about how much Oliver loves Jordana; only real words that a real 15 year old would speak. I appreciate the movie on a whole for being one of the few films that truly gets the teenage relationship factor.  Submarine is a really worthwhile movie, and one that I would recommend as long as you like independent, sort of quirky, and quiet movies. I think I would like the movie much more after another viewing in the future, but as of now, I solidly like it. I haven't fallen in love with it yet, but I can definitely see that happening if I spend some more time with it.

'Submarine' is Richard Ayoade's directorial debut and although unique and interesting, felt overlong and sligtly forced. Quirkiness is a nice aspect in some films, it offers a refreshing change and can leave you smiling, 'Submarine' however decided to go on a one man (movie) mission into the deepest pits of whimsical comedy to emerge drenched in what can only be described as a coating of quirk that completely smothers the film. When 'Amelie' did it, it felt just right, when 'Submarine' does it it becomes to much. The premise is still intersting and at it's core is executed well (the voiceover works) but overall I can't help but feel like it's an honest story with a load of rubbish on top.

I'm kinda all over the map with how I feel about this one. I like quirk, and I have found that once in a while I will enjoy awkward movies dealing with heartbreak and the awkwardness of adolescence and coming of age, but with this one, it really seemed like a mixed bag. As I started to watch it, I pictured myself disliking it because it come off as forced, trying too hard, and being way too reminiscent of many other, often far better films. I had heard people say it took heavily from Wes Anderson, specifically Rushmore, and, while I could see that to a small extent, I was primarily reminded of Harold and Maude, mostly because of the overwhelming coldness and morosity of the leads. However, that movie was hilarious, subversive, and ultimately not that bleak at all. This started to grow on me, and even though the characters aren't really all that likeable, I can't say I was really all that bored, even if I didn't find myself caring too much at times. Maybe the stylistic touches and cinematogrpahy had something to do with it. The film is maybe too obvious with its influences, but it does come around and become its own thing. That, and who says that all protagonists HAVE to be likeable and relatable? Ever see The Mosquito Coast? That's a great example of a terrific film with an absolutely loathsome lead character. Okay, the plot: it's the classic story of a young kid named Oliver trying to find his place in the world who has his first real experience with love with a girl who is just as out there and awkward as him. I can't really call her the Manic Pixie Dream Girl archetype since she's more cold and not that perky, but she is kinda like WInslet's character from Eternal Sunshine, but as a young Welsh girl. All of this goes on while Oliver's parents's marriage might be ending. The film is funny at times, but, and while I kinda like that it was downplayed with the laughs, it might be on the other side of quirky and whimsy as far as extremes go, meaning that it might not be light enough. Ultimately I did find myself happy for seeing the film, as I qas expecting it to be a complete ripoff, and it took a left and did the opposite. Yeah, I might not be totally happy with the direction it took, however, I appluad the film for not becoming totally predictable. Craig Roberts is fine as Oliver, though he didn't blow me out of the water. That award goes to Yasmin Paige as Jordana, Oliver's love interest. She's a fascinating character, and, though I feel awkward about admitting this, she's actually really cute and adorable, and has this magnetic quality about her that makes her really desirable for some reason. If I were younger, she's the type of girl I might try to go for myself. We've also got these youngsters backed by some great odler supporters, namely Noah Taylor as Oliver's withdrawn dad and Paddy Considine as a self help guru and ex of Oliver's mom who starts to re-enter the picture. All in all, I'm still mixed on the film. I do give it a small recommendation if you're in the mood for something different and want to see a colder take on this tried and true formula, but as far as specific grades go, I'd say strong 3 to no more than a very slight 3.5.