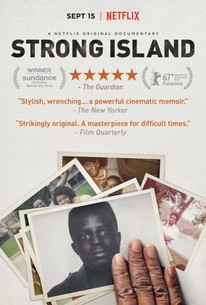 In April 1992, on Long Island NY, William Jr., the Ford's eldest child, a black 24 year-old teacher, was killed by Mark Reilly, a white 19 year-old mechanic. Although Ford was unarmed, he became the prime suspect in his own murder. Director Yance Ford chronicles the arc of his family across history, geography and tragedy - from the racial segregation of the Jim Crow South to the promise of New York City; from the presumed safety of middle class suburbs, to the maelstrom of an unexpected, violent death. It is the story of the Ford family: Barbara Dunmore, William Ford and their three children and how their lives were shaped by the enduring shadow of racism in America. A deeply intimate and meditative film, Strong Island asks what one can do when the grief of loss is entwined with historical injustice, and how one grapples with the complicity of silence, which can bind a family in an imitation of life, and a nation with a false sense of justice.

Where to Watch Every 2018 Oscar Nominee
Awards Leaderboard: Top Movies of 2017
Gotham Independent 2017 Award Winners: Call Me by Your Name Is Best Feature

Ford's building blocks are familiar, but this is no call-to-action film or how-to guide for getting answers and moving on.

It's deceptively simple, but it does so much so well. It's heartbreaking by the end...It's just really, really powerful.

A view of systemic racism through a highly personal and artistic lens.

Strong builds a poignant, methodical portrait of loss. Telling William's story won't bring him back, but at least it will let the world know he lived.

There are questions that circle around themselves, endlessly, providing no broader outlook. However, by the same token, it is that very lack of objectivity that makes Strong Island the experience that it is. It is a very tough film to shake.

The doc is a demanding, wrenching watch; an important work, if not necessarily one you'd recommend to your friends.

What Ford is trying to do with Strong Island is make his family's history visible once again, to give it the clarity and focus that were taken away. Through this process, the wounds of the past might be healed.

One of the rare films to embrace the full literary possibilities of the cinematic medium, in which the images conjured inside the mind can be just as vivid as the ones seen by the naked eye.

I was speechless for a few hours after watching this compelling documentary about injustice and its effect. [Full review in Spanish].

Yance [uses] the contours of the memoir to finally give his brother the justice that he was denied all those years ago. Therein lies its undeniable power.

Strong Island becomes a steady stream of revelations perfectly timed to completely transform everything we have just learned.

Ford is so gifted at taking old photographs and interviews and making a movie that is always beautiful to look at.

Alonso Duralde
What the Flick?!
View All Critic Reviews (48)

By structuring this film as an intimate exploration of the pain and personal suffering that a family was forced to go through following a horrific tragedy, Ford creates a poignant and heartbreaking documentary that exposes the injustices of a racist society and justice system.