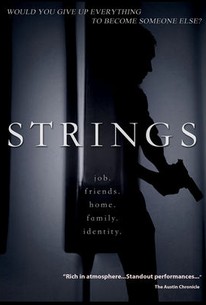 As written by Mark Dennis and co-directed by Dennis and Ben Foster, this harrowing psychological drama concerns a troubled musician who accidentally falls into brainwashing and mind control. The performer initially seeks out an experimental therapist to aid him, but soon the doctor begins to plot and scheme against his patient; he persuades the man to relinquish all of his possessions and relationships and assume a new identity. The musician soon realizes that the "doctor" is manipulating unknowing individuals into committing violent vigilante felonies.

There are no critic reviews yet for Strings. Keep checking Rotten Tomatoes for updates!

There are no featured audience reviews yet. Click the link below to see what others say about Strings!