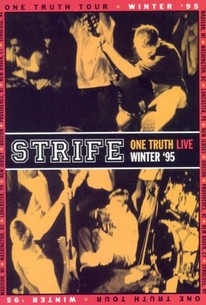 The hardcore metal band Strife has their 1995 winter tour documented on this film. In addition to live performances, the film shows how the band has become one of the mainstays of the hardcore movement. The DVD release of the film boasts music videos, and a full Japanese concert that is excerpted in the film itself.

There are no critic reviews yet for Strife: One Truth Live. Keep checking Rotten Tomatoes for updates!

There are no featured reviews for Strife: One Truth Live at this time.