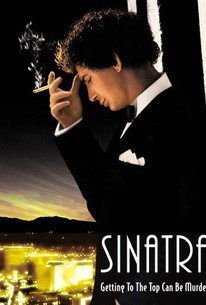 True to its title, this gritty British drama chronicles a Scottish lounge singer named Toni Cocozza (played by Backbeat's Ian Hart) whose act consists of singing Ol' Blue Eyes covers in the dive bars of the working-class Glasgow neighborhoods. When he isn't performing, Toni's life is in a shambles; he is seen generally as the laughing stock of the community, with only his accompanist Bill (Alun Armstrong) there to give him support. Toni's life turns around, however, when a local gangster (Iain Cuthbertson) sends his imposing main man, Chisolm (Brian Cox), backstage with a request to perform an Elvis Presley song, which he does without argument. He is taken in by the new gang, landing a job at a casino run by Chisolm, where he meets a charming young cigarette girl named Irene (Kelly MacDonald). Toni finds his new life infinitely more fulfilling, but is warned of its dangers by trusty Bill, and when Toni is drawn further into the gang's violent doings, he becomes increasingly more afraid for his life. This is a second feature for writer/director Peter Capaldi, who is better known as an actor from such films as Bean and Captives.

Richard E. Grant
as Himself

Jimmy Tarbuck
as Himself

Calum Beaton
as Boy on Stairs
View All

Strictly Sinatra is certainly better than mediocre and it's often quite entertaining, but it's not precisely cause for a stampede to the video store.

Kind of like 'Swingers' but with colorful Scottish accents!

Capaldi has found a neat way to stand the mafia movie genre on its head at times.

By the time Sinatra turns into GoodFellas, you'll have likely given up on the whole affair.

Loaded down with gritty Glasgow atmosphere and authenticity, and works so well as an ensemble piece.