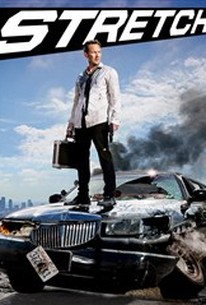 Hard luck limo driver Stretch (Patrick Wilson) is struggling to go straight and pay off a debt to his bookie when he picks up a crazed passenger (Chris Pine) whose sought-after ledger implicates some seriously dangerous criminals. ~ Jason Buchanan, Rovi

Ahman Green
as Doorman
View All

While the movie does eventually ramp up to a terrific purr, it hits plenty of speed bumps in its opening.

One can't help but read the film-which was dropped by its studio, and is now available digitally-as an expression of everything Carnahan hates about the movie business.

It's another example of how great Wilson can be in a well written role, and it's more entertaining than a majority of the films that studios unceremoniously end up dumping into theaters anyway.

Stretch has a lot of things going for it that similar underachieving films don't, namely Patrick Wilson in the lead.

The film's absurd and often offensive humour will win you over. It's not big and it's not clever, but it will raise a smile or two.

This marks Carnahan's sixth feature, and in many ways feels like the fitting end to his Gonzo Trilogy.

Stretch gets off to such a hectic, abrasive start that many viewers will wish to jump out immediately. Stick with [Patrick Wilson's frazzled chauffeur], though, and his surreal escapades turn out to be surprisingly entertaining.

Stretch feels like the dots joined from what was left on Carnaghan's drawing board.

Stretch thinks it's so damn clever, and is totally self-satisfied with its over-written dialogue.

Stretch offers more narration than a Morgan Freeman film festival, one of several pot holes it jumps over without a ramp.

The film is an obnoxious cartoon version of Hollywood noir, but Carnahan has the chops to keep it moving quickly.

Stretch is a bold, bonkers and completely brilliant blast of creative energy from Joe Carnahan at his most gleefully unrestrained.

Isaac Feldberg
We Got This Covered
View All Critic Reviews (16)

Patrick Wilson stars in the offbeat comedy Stretch. The story follows a limo driver named Stretch who picks up an eccentric millionaire who offers to payoff Stretch's gambling debts if he sticks with him throughout a wild night of debauchery. Co-starring Jessica Alba, Ed Helms, and Chris Pine, the film has a pretty good cast. However, the script is weak and doesn't seem to know where it's going most of the time. And, a lot of the crazy shenanigans seem random and contrived. Stretch is a bit of fun, but it's also messy and unfocused.

Can't get enough of these kinds of movies that involve one lead character pressed for time on a mission. It is a roller coaster ride through and through. Patrick Wilson does a great job making it work as the driver down on his luck who comes to a realization throughout his journey he has the spine to come out on top in the crunch. A super solid supporting cast led by the craziest role I have seen Chris Pine in to date. Ed Helms, Brooklyn Decker and Jessica Alba all had minor, but pivotal roles. With actors like this, and yes I am including Decker because I feel she has done decent work for the films I have seen her in, you can make it through some of the slow parts. There were some good cameos and one thread of the story left without a conclusion of who the driver of the rival company was, but the main storyline stayed true with some enjoyable speed bumps along the way that didn't deter from the end result.

Joe Carnahan has made six feature length films, four of which I have now seen. Some of them I remember, others I don't recall much of. I haven't seen his debut 1998 feature Blood, Guts, Bullets and Octane (which looks and sounds horrendous) nor his sophomore follow-up in 2002's Narc though I hear that one is actually worth a look. I was introduced to Carnahan's tendency for manic action in his hyper-stylized 2006 effort which he both wrote and directed, Smokin' Aces. I can remember Aces featuring an all-star ensemble, but a story that alludes me though that doesn't matter. It was a film with a visual flair all its own and from what I do remember it was that overt style that made me want to seek it out more than anything else. Going through the rest of Carnahan's filmography brings us to the highly underrated, intended to be franchise-starter that was 2010's The A-Team (an almost $80 million domestic gross against a $110 million budget) and then on to the next years The Grey which gave Liam Neeson what looked like another actioner in his new position as official movie badass, but was actually a thoughtful, meditative look at love, loss and the meaning of our existence among the threats of the wilderness and wolves. He is an eclectic kind of filmmaker as the aforementioned filmography proves, but he clearly has his tendencies when it comes to the types of films he likes to make and the very precise style he likes to infuse them with. There isn't necessarily one distinct style, though his pacing is key, but it is more about the melding of the style and material together in a way that produces something that feels totally organic. Organic in terms of a harmonious relationship between several different elements and Carnahan is now at a point in his career with his latest, Stretch, that he pulls off his manic tone with ease as his multifaceted screenplay dips in and out of different circumstances while never losing its energy. read the whole review at www.reviewsfromabed.net