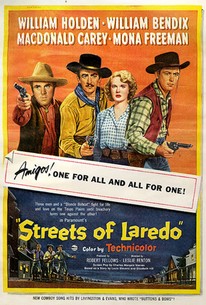 Streets of Laredo is a streamlined and Technicolorful remake of Paramount's 1936 box-office champ The Texas Rangers. William Holden, William Bendix and MacDonald Carey star as roguish outlaws Jim Dawkins, Wahoo Jones and Lorn Remming. After rescuing a little girl named Rannie Carter from a wicked tax collector, Dawkins and Jones decide to switch to the right side of the law; Remming, however, has other ideas. Years later, Rennie has grown up quite prettily into Mona Freeman, while Jim and Wahoo have become scrupulous members of the newly-formed Texas Rangers. Jim is in love with Rennie, but she has eyes for the still-crooked Lorn -- at least until Lorn proves to be the louse that the audience knew he was from the first reel. Streets of Laredo meticulously recreates the most famous scene from Texas Rangers, wherein one of the film's more sympathetic characters is abruptly shot to death from under a table; the scene still works, though it packed a bigger wallop in the original. Alfonso Bedoya, the "I don't have to show you any stinking badges" bandit from Treasure of the Sierra Madre, is appropriately menacing as the tax collector.

Hank Worden
as Cowhand
View All

Critic Reviews for Streets of Laredo

It offers a reasonable amount of outdoor scenery, a short measure of shooting and riding and much too much brooding over whether Ranger Holden should betray his old pal Carey.

The plot is as familiar as your own hand and there is little new in the action. But somehow the whole thing turns out to be exciting. Maybe it's because of the capable cast.

The story is a grossly hackneyed thing and the dialogue is of an order which no self-respecting horse would deign to speak.

[Streets of Laredo] probably seems duller than others which achieve no more because it is such an everlastingly talky affair, the talk being couched in some of the most painful colloquial terms in months, ah reckon.

There is a fine star-making performance from a deceptively casual William Holden, whose burgeoning screen presence demands attention, especially when dull co-star Macdonald Carey is on screen.

The finished film suffers from some confusing cutting, but the performances of the leads and the nice color photography make it worthwhile entertainment.

There are no featured reviews for Streets of Laredo at this time.