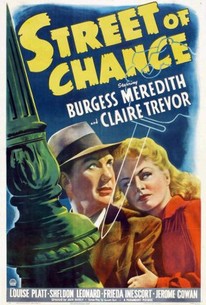 Based on Cornell Woolrich's novel The Black Curtain (later dramatized several times on the radio series Suspense), Street of Chance top-bills Burgess Meredith as an amnesia victim. He awakens in the middle of the street, with nary a clue of who he is or what he's done. Meredith comes to learn that his past year of darkness has been a crowded one--and that he might be a murderer! Louise Platt plays Meredith's wife, but it's total stranger Claire Trevor who seems most interested in probing Meredith's past. Street of Chance is worth spending 74 minutes with, even though the true identity of the killer becomes obvious halfway through. ~ Hal Erickson, Rovi

George Watts
as Proprietor of Pawnshop

Gloria Williams
as Woman
View All

Critic Reviews for Street of Chance

Most of the film left me in the dark.

Audience Reviews for Street of Chance

There are no featured audience reviews yet. Click the link below to see what others say about Street of Chance!