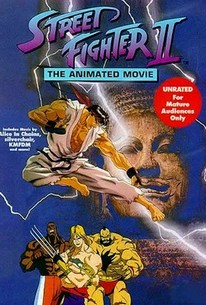 This Japanese animation is an adaptation of the same video game that was also the basis for Street Fighter, a 1994 live-action film that featured Jean-Claude Van Damme. The animated version is more faithful to the story of the video game; ironically, its characters and story are much more realistic than those in the American film. The popular video characters, Guile, Chun Li, Ken, and Ryu, are pitted against M. Bison and the game's villain characters. Although few adult viewers would be really interested in this offering, a highly recognizable and marketable name has blessed Street Fighter II with better-than-average animation and production quality. ~ Jonathan E. Laxamana, Rovi

One of the most faithful video game adaptations to date. [Full review in Spanish]

... although this won't challenge your intelligence, this film stands head and shoulders above the live-action, Jean-Claude Van Damme fiasco.

Game movies tend to fall flat. This one in particular was interesting if you are at least moderately familiar with the characters; some people don't care for Japanese anime, in which case this film won't change their minds. But I felt the the Vega/Chun-Li scene and the Ryu/Ken flashback sequences were the most dynamic and entertaining portions of the film.

This is the SF2 film, in manga form this is absolutely fudging brilliant and captures the game perfectly. Its not hard as it just comes across as an extended in game sequence but who cares, this is near perfect. The animation is crisp and sexy, the soundtrack is excellent and the story, despite basic, grips you. Only thing..it could of been abit more bloody for me haha Best fight...Vega v Chun Li :) check the soundtrack :)

The animation was great and all the fight scenes were some of the best I have seen done in animation. It had the familiar feel of the game that made it fun to watch as well. On the downside the story was all over the place and it didn't have room for all the characters it packed into the flick. Fun to watch though.

Bison: What's wrong Guile? Thinking about your friend I killed? Try harder! Guile: SONIC BOOM! This is the kind of movie that captures the essence of a game. The story is nothing real important, characters are all over the place, and it's visual loud and vibrant. The movie revolves around street fights shown in the best manner possible to stay true to the game. Fans will recognize all kinds of things that ring true. The animation is very well done, the fights, a few in particular, are well handled and stay true to the spirit of the game. The whole thing is of course very cheesy in terms of anything not related to the style of the video game. Still, a fun watch for fans.