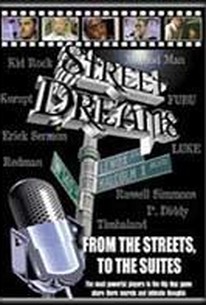 This documentary, hosted by Tony Dofat and produced in part by Heavy D, takes the viewer behind the scenes for the inside story of rap music. The program hits the mean streets of inner-cities, where the music got its start, and follows its rise to popularity throughout America in some pretty unexpected places. Interviews with rappers, including Puff Daddy, Kid Rock, Redman, Russell Simmons, and Method Man, shed light on the forces out of which the rap tradition springs. Production people and recording executives share their insights about the music and culture of rap. ~ Rose of Sharon Winter, Rovi

There are no critic reviews yet for Street Dreams. Keep checking Rotten Tomatoes for updates!

There are no featured reviews for Street Dreams at this time.