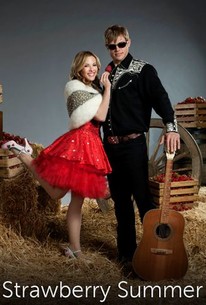 A small town music teacher invites a bad-boy country singer to perform at her town's annual Strawberry Festival, and together they discover the power of dreams in this Hallmark Channel original film. Beth Landon (Julie Mond) teaches music, but ask her neighbors what she's best known for and odds are they'll mention she's the reigning "Strawberry Queen." As this year's big Strawberry Festival draws near, Beth hatches a plan to have famed country singer Jason Keith (Trevor Donovan) be the featured musical performer. But after a series of public controversies Jason's career has hit the skids, prompting the fans to write him off as a one-hit-wonder. Realizing that the Strawberry Festival could provide the perfect setting for his big comeback, Jason agrees to perform. Meanwhile the more time Jason spends with Beth, the more he realizes that a troubling secret from his distant past could be holding him back. Together, Jason and Beth prepare to put on the concert of a lifetime, and find their dreams coming closer into reach than ever before. ~ Jason Buchanan, Rovi

There are no critic reviews yet for Strawberry Summer. Keep checking Rotten Tomatoes for updates!

There are no featured reviews for Strawberry Summer at this time.