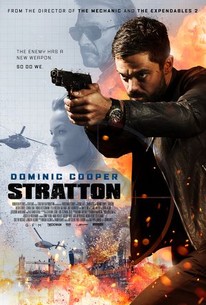 Stratton, a Special Boat Service operative for MI6, and his American counterpart Marty, scope a laboratory complex in Iran in order to intercept deadly biochemical weapons. This most complex of missions goes spectacularly wrong however and in the mayhem Marty is mortally wounded. Stratton knows his trusted friend isn't going to make it. ​ Back at base Stratton is summoned by the big boss at MI6. She has received intel that a former Soviet operative - Barovski - has gone rogue. Thought to be dead for the last 20 years, it is believed Barovski has plans to take revenge on his former paymasters by using stolen chemical weapons. From hereon in, Stratton and his team must drawn on all their training and experience to race against time and stop the unimaginable happening.

Lizzie Winkler
as Alice
View All

An aggressively unimposing movie such as this might not be the worst time-waster. But it's still a time-waster.

Solidly pro in overall packaging yet cliched, pedestrian and indistinct in specific contributions, this thriller never finds (let alone raises) its own pulse.

A stale espionage thriller that possesses all the pulse-pounding intrigue of waiting in line at the DMV.

Cooper, requisitely bearded, plays Stratton merely as a mildly sullen professional who goes about his business; there's little surface indication of the hurt and loneliness that must be driving this man at each step.

West aims for a kind of Jason Bourne or Mission: Impossible feel, but he falls short in budget, star power and explosive spectacle.

A frustrating, bland, cliché-ridden affair that does nobody involved any favours. Blink and you'll forget it, and that's no bad thing.

Danielle Davenport
One Room With A View

A fast-paced cheaply made Euro thriller that reminds us Jason Bourne was a good film and this similar action pic is not.

As the chases, shootouts and explosions pile up, so do the clichés, which derail any suspense the film might intermittently build.

A capable leading man can't save this generic DTV-level thriller.

Simon West has a really odd choice for films and this is just about on par with the Nicolas Cage film Stolen. The first 30 minutes is so boring and the action scene that opens the film does not generate any interest. The film fails to deliver any real storyline and I'm amazed at the talent involved with this film, surely they should've known better.