Stranger on the Third Floor1940 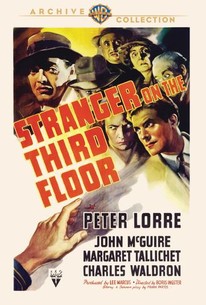 Stranger on the Third Floor Photos

This small, interesting, film which is generally considered the first film noir, The Stranger on the Third Floor, directed by Boris Ingster, is the story of the story of a reporter's search for a murderer. Ward, (John McGuire) was the star witness in a murder trial that convicted Briggs (Elisha Cook, Jr.), but he begins to doubt his own testimony. When another murder is committed Ward begins to focus his suspicions on a mysterious stranger (Peter Lorre), and attempts to find the true killer in time to save Briggs. This film, beautifully photographed by Nicholas Musuraca, shows the German influence on the classic film noir with its deep focus, high contract, stylized photography. The tone of the film, with is Baroque nightmare scenes establishes the technique which will be later used to great effect in the entire genre.

Peter Lorre
as The Stranger

Robert Weldon
as Reporter
View All

Critic Reviews for Stranger on the Third Floor

Thanks to its performances, all perfect, and its staging, "Stranger on the Third Floor" is a discovery that still surprises more than seventy years later. [Full Review in Spanish]

... a paranoid murder thriller that, for all of its budgetary constraints, took viewers on a spiral of justified paranoia.

This low-budget B film is thought by many to be the first true film noir.

Audience Reviews for Stranger on the Third Floor

so it's a bit contrived and the lead actress is quite bad but this highly stylized film is considered the first noir with good reason: stunning art direction, especially the remarkable dream sequence, and great expressionist cinematography by nicolas musuraca. makes a powerful anti-death penalty statement as well

In "Stranger on the Third Floor," Michael Ward(John McGuire), a reporter, is the chief witness for the prosection in the murder trial of Joe Briggs(Elisha Cook Jr.), a drifter. During the trial, Michael's fiancee Jane(Margaret Tallichet) comes by to lend moral support. After Briggs is convicted of first degree murder and is likely to be sentenced to death, Michael starts to have second thoughts, especially after this strange dude(Peter Lorre) puts in an appearance. "Stranger on the Third Floor" is a dark little number with a very cool nightmare sequence. The movie is about how often appearances can be deceiving while taking a shot at the strict moral code of the time and this is an important lesson for Michael if he is to be a success at his chosen profession. However, the movie wraps a little too neatly and quickly, as more could have been done with the premise.

A good little B-movie about a journalist whose eyewitness testimony convicts a potentially innocent man of murder. The journalist himself then becomes a victim of circumstantial evidence after his despised neighbour is murdered. The plot is contrived and overuses both flashback and voice-over, but there's an excellent expressionist dream sequence in the middle. John McGuire makes a dull hero but Peter Lorre walks away with the movie with his 10 minute contribution.

In some circles, the first film noir movie. The story is nothing special as Maguire plays a reporter who made the big time because of a mistaken identity murder which he later becomes involved in. There are some greatly-lit scenes which became a staple in film noir, but that dream sequence is worth it alone. Peter Lorre is as freakish as ever and Elisha Cook, jr. plays the classic sap perfectly. The story's a little uneven, but if you're a film noir fan Stranger on the Third Floor is a must.

Stranger on the Third Floor Quotes