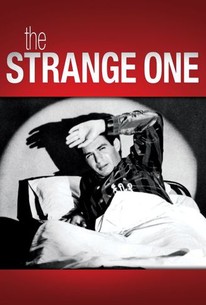 The Strange One Photos

In his film debut, Ben Gazzara repeats his stage portrayal of Jocko De Paris, a manipulative psychotic who holds a Southern military school in thrall. With the help of his flunkies, cadets Harold Knoble (Pat Hingle) and Roger Gatt (James Olson), Jocko sadistically terrorizes the underclassmen, forcing them to do his bidding. Efforts made by Major Avery (Larry Gates) to expose Jocko are constantly thwarted by the students' conspiracy of silence and by Jocko's own efforts to destroy Avery. Finally, cadet Robert Marquales (George Peppard, likewise making his first film appearance) can stand no more: turning the tables on Jocko, Marquales reveals the monster for the snivveling coward he really is. This filmization of Calder Willingham's play and novel End as a Man almost didn't make it to the screen due to its pronounced homosexual subtext. The filmmakers managed to circumvent the censors by removing three minutes of allegedly offensive footage, and by making the film's most overtly gay character a slimy, repulsive creep (another implicitly homosexual character, played by Arthur Storch, is depicted as merely wimpish and withdrawn). As a box-office come-on, Calder Willingham added the superfluous character of good-time gal Rosebud (Julie Wilson).

Julie Wilson
as Rosebud
View All

Critic Reviews for The Strange One

It must be admitted that while the events are happening they are often very compelling - and this in spite of the clumsy shape of the narrative.

Fascinating in the way that a killer cobra is fascinating, this is a nasty story about life in a Southern military academy... The central role of a cadet who is a monstrous sadist is skillfully played by Ben Gazzara.

Nobody in the film behaves or speaks like a real person.

Though the homosexual subtext was daring for the 1950s, the film is much softer than the play.

Audience Reviews for The Strange One

There are no featured audience reviews yet. Click the link below to see what others say about The Strange One!

The Strange One Quotes