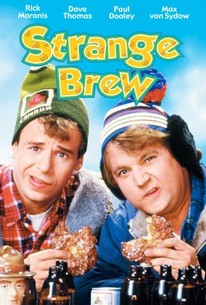 Critics Consensus: Though lowbrow in intent and outcome, Strange Brew effectively mines laughs from its unique premise and likeable stars.

Critic Consensus: Though lowbrow in intent and outcome, Strange Brew effectively mines laughs from its unique premise and likeable stars.

Purporting to be loosely based on Hamlet, Strange Brew is about an evil braumeister at the Elsinore Brewery who has discovered an additive that when guzzled in beer, allows the drinkers to be easily controlled. Braumeister Smith (Max von Sydow) has a plan to take over the world with his new brew, and only the Great White hosers of the North, Bob and Doug McKenzie (Rick Moranis and Dave Thomas) -- with their plaid shirts, ski toques, fur-lined parkas, and addiction to beer -- can stop the dastardly plan, sober or not. There are several jabs at "hoseheads" and the business of movie-making, including an epilogue that critiques the film itself. Strange Brew found a cult audience with fans of the Second City comedy troupe, of which Moranis and Thomas were members. ~ Eleanor Mannikka, Rovi

Tom Harvey
as The Inspector

David Beard
as The Judge

Thick Wilson
as The Prosecutor

Ron James
as Man in Movie

Dora Dainton
as Lady in Movie

David Clement
as Man in the Alley

Ilija Ilijevski
as M.C. at Oktoberfest

George Stinton
as Policeman #5
View All

The price of a ticket could buy enough beer for an experience at least as memorable as this one.

Overall, I'm not sure anyone picking up Strange Brew cold right now without any prior exposure to the characters would even be able to tell what they're looking at. I still find it entertaining, and I love Rick Moranis in the film in particular.

Frankly, I was sold the moment the MGM lion gave out an inebriated belch.

Their take on the Bard is as imaginative as any other cinematic adaptation, plus a good deal funnier

No, there's nothing intelligent here -- just a couple of likable fellows trying to stop mad Brewmeister Smith (Max von Sydow) from gaining control of the world.

The film celebrates stupidity and would likely have caused an international incident if Canadians weren't so nice, but it essentially lives up to its premise, once in a while coming up with a gag that is halfway funny.

Just odd enough to skate by; you remember the singular tone of the film long after the gags have faded.

Follow the idiot McKenzie brothers on this incredibly dumb journey, this is a stupid Canadian comedy masterpiece, hoser!

I love Moranis, but I'm not a big fan of Thomas. Most of the time this movie was fun and really hilarious, but there are some stupid jokes thrown in that I didn't like, and it disappointed me because I really wanted to like this movie. Overall, though, it's enjoyable enough, but it could be better.