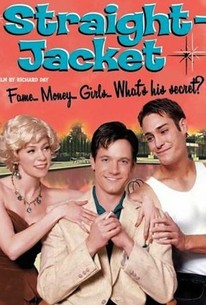 Critics Consensus: Straight Jacket succeeds in its moments of lighthearted comedy, but ultimately collapses under the weight of its serious -- and clumsily imparted -- messages.

Critics Consensus: Straight Jacket succeeds in its moments of lighthearted comedy, but ultimately collapses under the weight of its serious -- and clumsily imparted -- messages.

Critic Consensus: Straight Jacket succeeds in its moments of lighthearted comedy, but ultimately collapses under the weight of its serious -- and clumsily imparted -- messages.

An actor trying to keep the truth about his love life under wraps discovers feelings he doesn't want to hide in this frothy comedy. It's the mid-'50s, and Guy Stone (Matt Letscher) is a very successful movie star. Tall, good-looking, and boyishly charming, Stone has a reputation as a ladies' man with a very active love life. However, the truth is a bit different: while Stone is indeed enjoying more romantic misadventures than he can keep track of, he happens to prefer the company of men. When a scandal sheet gets wind of his sexual proclivities, Stone's manager (Veronica Cartwright) and the head of his studio (Victor Raider-Wexler) decide some camouflage is in order. Stone's handlers arrange for him to marry Sally (Carrie Preston), a sweet and naïve secretary from the studio who is entirely unaware that the man of her dreams is gay. As Stone tries to make the best of his sham marriage while feeling twinges of guilt about the toll it may take on Sally, he meets Rick Foster (Adam Greer), an author whose most recent novel is being adapted into a script for Stone. To Stone's surprise, he find himself falling seriously in love with Foster and discovers that Foster, like himself, has a few secrets that could put his Hollywood career in jeopardy. Straight-Jacket was directed by Richard Day, who also wrote the screenplay which was adapted from his off-Broadway play of the same name.

Benjamin Sprunger
as Trick in Alley

Ricky Dean Logan
as Moron No. 1

Matt Bushell
as Moron No. 2
View All

It's a shame, then, that Straight-Jacket turns dour and melodramatic ... The light-hearted fun seeps out of the movie, replaced by trite interludes of coming-out angst, McCarthy-era persecution and even gay-bashing.

It has verve, color and energy, but there's something fundamentally bogus about it, and whenever it takes a turn into seriousness, entire moments fall apart.

A fey and frisky farce with a fabulous fashion sense.

Wastes its promising premise with a wavering tone that veers uneasily between camp humor and, pardon the expression, straightness.

This featherweight spoof of closeted, Red-baiting Hollywood in the mid-1950's is played as such an exaggerated cartoon that its political outrage is dissipated by its stridency.

On film, things play as flatly as any failed soufflé.

Until it tries to mean something, Straight-Jacket is an enjoyably manic little farce whose wit far exceeds its production budget.

At its best when it's sending up '50s-era Hollywood and it's at its worst when trying to make a serious point.

As satire, it is often deliciously barbed and catty, the jokes flying fast and furious ... but when it tries to make its points seriously, it immediately loses me.

Some of it is smart, much clever, most funny and all entertaining.

The perkiness with a capital P, gorgeous set and great color can't completely salvage an occasionally strong cast and middling story (and don't forget a lousy, if literal, title).

Very fun, campy film with some great moments and lead actors that throw themselves into the film with gusto and a lot of self-deprecating humour. The timing wasn't always perfect and the hilarity was unfortunately not sustained throughout the whole movie. But overall an entertaining, well-meaning comedy with just a pinch of truth.