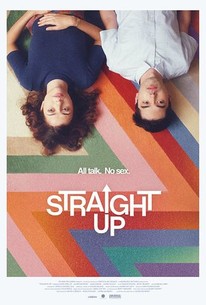 Todd is a hyper-articulate, obsessive compulsive gay twenty-something whose fear of dying alone leads him to a baffling conclusion: he might not be gay after all. When he meets Rory, a whip-smart struggling actress with her own set of insecurities, the two forge a relationship that's all talk and no sex. Writer-Director-Star James Sweeney delivers a razor sharp rom-com that's equal parts Classical Hollywood and distinctly 21st century, exploring just how elastic our definitions of love and sexuality can get.

Critic Reviews for Straight Up

We often make our own psychological prisons, and Straight Up is a droll embodiment of its protagonist's (and perhaps its maker's?) inner turmoil.

It's the battle between what they feel for each other and what they believe their relationship should amount to that gives Straight Up its most memorable qualities.

Straight Up is a fine showcase for an emerging voice who is smart enough to keep things tight.

Rory and Todd on the surface do not seem to be an ideal match, despite the number of things they have in common, including the concept that they might both really like men.

James Sweeney's Straight Up is overtly weird and implies honesty when it comes to what makes an ideal relationship work, despite getting jumbled in its expeditious, garrulous execution.

As a whole, Straight Up is immediately pungent - perhaps its central character may be conflicted about the person he should be, but Sweeney arrives fully-formed in his identity as a filmmaker.

There are no featured reviews for Straight Up at this time.