Straight from the Heart2003 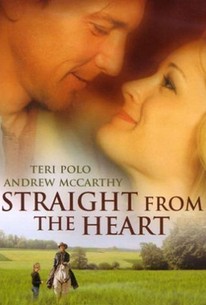 Straight from the Heart Photos

The old "wrong person answers the 'object-matrimony' ad" story device was refreshingly brought up to date in this made-for-TV romance. Jilted by her boyfriend, professional photographer Jordan Donovan (Teri Polo) decides that her problem is one of bad location; though a New Yorker for several years, she still feels like a fish out of water. Meanwhile, Jordan's roommate, Laurie (Patricia Kalember), ever searching for a suitable mate, has put an ad in the personals column of a national magazine. When a widowed rancher answers the ad, Jordan (with Laurie's blessing) answers the letter herself and heads to Wyoming. Upon meeting Jordan, taciturn rancher Tyler Ross (Andrew McCarthy) is disappointed, and lashes out with a steady stream of preconceptions about New York girls. Recoiling, Jordan lets Tyler know exactly what she thinks of "cowboys." Naturally, this means that the two lonely people are crazy about each other -- but before a happy ending can transpire, Tyler must overcome a profound feeling of guilt over his first wife's death, fueled by his spiteful father-in-law. Originally slated to debut over the Hallmark Channel on February 14, 2002, Straight from the Heart was curiously held back for nearly a year, finally premiering on February 9, 2003.

Critic Reviews for Straight from the Heart

There are no critic reviews yet for Straight from the Heart. Keep checking Rotten Tomatoes for updates!

Audience Reviews for Straight from the Heart

Straight from the Heart Quotes