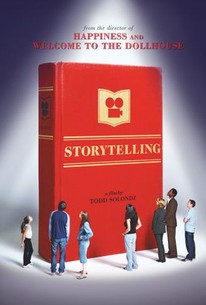 Critics Consensus: Todd Solondz's Storytelling boasts an audacious narrative structure, but fails to deliver on the mechanics of its namesake, yielding a creative exercise that is more interested in satisfying the author's interests than the audience's investment.

Critics Consensus: Todd Solondz's Storytelling boasts an audacious narrative structure, but fails to deliver on the mechanics of its namesake, yielding a creative exercise that is more interested in satisfying the author's interests than the audience's investment.

Critic Consensus: Todd Solondz's Storytelling boasts an audacious narrative structure, but fails to deliver on the mechanics of its namesake, yielding a creative exercise that is more interested in satisfying the author's interests than the audience's investment.

Two stories set in two eras against the comical terrain of college and high school, past and present--exploring issues of sex, race, celebrity and exploitation. The first story: On a college campus in the mid-80s, a white female writing student has an emotional experience with her black, male writing teacher. The second story: In 2000, Toby Oxman is a 30-year-old wannabe celebrity and a documentary filmmaker. He sets out to document the Livingstons, an affluent suburban family raising three boys. The eldest is Scooby, a goofy, uninspired high school senior who aspires to be the next Conan O'Brien but whose parents are desperate for him to attend college in the fall. Brady, his 16-year-old brother, is the school's handsome and popular football star. When Brady is injured by another student during a football game, friends and family are forced to take stock of their values and re-evaluate their lives.

Conan O'Brien
as Himself

Frederick B. Owens
as Football Coach

Barry Jordan
as Himself

Robin Goodman
as Herself

Marisa Redanty
as Onlooker No. 1

Ilana Levine
as Onlooker No. 2
View All

Despite [Solondz's] undeniable talent, however manipulative, his stories are too sour and mean-spirited for my taste.

That Storytelling has value cannot be denied. Not even Solondz's thirst for controversy, sketchy characters and immature provocations can fully succeed at cheapening it.

In his latest effort, Storytelling, Solondz has finally made a movie that isn't just offensive -- it also happens to be good.

Solondz is without doubt an artist of uncompromising vision, but that vision is beginning to feel, if not morally bankrupt, at least terribly monotonous.

A frustrating experience, made more so by the seemingly self-referential moments in the film.

Sometimes seems less like storytelling than something the otherwise compelling director needed to get off his chest.

While Solondz tries and tries hard, Storytelling fails to provide much more insight than the inside column of a torn book jacket.

Solondz has finally brought his critics into the frame, if only in an attempt to subject them to the same torture as everyone else.

The film is marked by the same darkly humorous sensibility of rest of Solondz's work, excpet that the novelty is gone and the acerbic vision is now contained in a fractured text marred by poor storytelling and shifting tone--it's not easy to shock anymore

In a scabrous follow-up to Happiness, Todd Solondz once again crafts a movie easier to admire than it is to like.

It's never less than interesting, that's for sure, but I didn't like it.

There's two stories here: the first is about a writing class, particularly the teacher and two students, all concerned with "creating fiction". The second part concerns a documentary filmmaker interested in showing the real stress applying for college engenders amongst high schoolers. But it's what's beneath the surface and how it's revealed that makes this a sparkler for me, a film that's aware that it's not for mainstream thinking, it's Armageddon without the SFX or CGI.

This is a two-part film, one story about the racial tensions that result when a creative writing student has a tryst with her professor and the other about a documentarian trying to film an unstable teenager. In every sense this is a Todd Solondz film: the long shots and silences, the out-of-place characters, and the cringe comedy. But of all the Solondz films I've seen, I think this is my favorite. The characters are more finely drawn, and even though the themes are opaque, like most of his work, there seems to be more cohesiveness to this effort. I also really enjoyed the performances in the first segment, especially by Selma Blair and Leo Fitzpatrick. The film's main flaw is the opacity of the themes. Why do these two stories belong together? Is Solondz trying to say something about how thin the line is between fact and fiction? I'm not sure. Overall, I liked this film even though there are significant aspects that remain unclear.

The thing about Todd Solondz's "Storytelling" is that you can't simply just watch it as another, random film, because it's not just 'another random film.' You will have needed to have seen Solondz's previous work ("Welcome to the Dollhouse," "Happiness") and grasp the controversy and criticism surrounding him, for "Storytelling" is a meditation on Solondz's sensibilities. Solondz turns his script and lens back on the audience as well as himself. He is questioning both his admirers and his detractors. He is also questioning himself- why he is drawn to this material, why explore such darkness? "Storytelling" is a sort of subtlety brilliant piece of metafiction but it's not all entirely satisfying. These stories are just a tad bit trite, yet they still come with a considerable amount of good- namely the casting (Blair, Goodman, Giamatti, Webber) and Solondz's sharp dialogue and observations. I can't recommend this film to anyone other than fans of Todd Solondz's fascinating and unforgivably complex body of work.

Amazingly structured, beautifully shot, and brilliant, straightforward and honest dialogue. Storytelling is dark humored, luridly amusing and entertaining, and funny as hell in the demented sense. It's sharp, perversely genuine, witty and brutally forthright. Avoid the "R" rating at all cost and watch this in it's true form, RENT THE UNRATED VERSION! "Fiction" Vi is a hip college teenager who allows herself to be exploited and abused by any guy, including her writing professor, in order to get inspiration for her creative writing class. - In my eyes, this story seems to me it would be more on the "Non-fiction" side. But you can be the judge. "Non-fiction" Toby Oxman is a hapless loser/shoe salesman who wants to be a famous documentary filmmaker. For his first project, Toby explores the dysfunctional Livingston family, focusing mostly on the oldest son Scooby, an alienated, hates-the-world, ticking-time-bomb, bisexual, high school student with dreams of being famous. - Strange how this story is "Non-fiction", but hell, I love it's eccentricity. Just makes the movie more intriguing. Storytelling is disturbing, but it's always fun! Coming from the guy who directed "Welcome to the Dollhouse" you should already know what kind of material to expect. Todd Solondz is a great director, always with a strange and twisted, but interesting outlook on life. He's an amazing artist. I highly recommend Storytelling.

"A masterful comedy that will divide audiences, but it left me laughing hysterically. I hope that doesn't make you think I'm a sick bastard, but if so, piss off." - Film Threat "I saw it a third time. By then I had moved beyond the immediate shock of the material and was able to focus on what a well-made film it was; how concisely Solondz gets the effects he's after." - Roger Ebert "Solondz has finally made a movie that isn't just offensive -- it also happens to be good. He's still shouting, still violating our politically correct sensibilities, but the shocks now have thematic purpose. They don't just titillate, they resonate." - The Globe and Mail "The leanest and meanest of Solondz's misanthropic comedies, feasts on the anguish of adolescence and confusion of college -- white suburban-style." - Village Voice "Almost as uncompromising, and sometimes as funny, as "Dollhouse" or "Happiness."" - Chicago Tribune "It's extremely well played and often very funny. But beware: Solondz uses humor as a booby trap, so be careful what you laugh at." - TV Guide "A movie that advances the career of a demonstrably gifted filmmaker, a fearlessly funny movie whose laughs draw blood, a bracingly provocative movie that won't apologize for its bad temper." - Rolling Stone